Pope who celebrated the triumphs of the martyrs 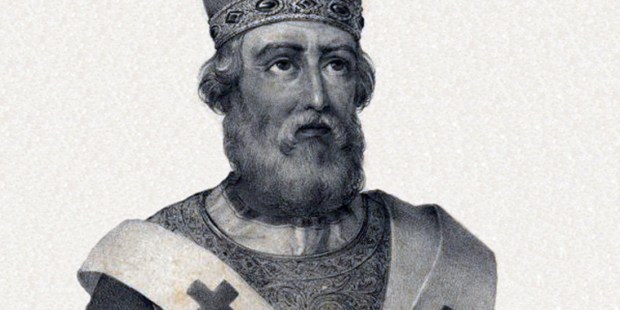 + Damasus was born in Rome and was the son of the priest of San Lorenzo; he served as his father’s deacon.

+ When Pope Liberius died in 366, Damasus was elected Bishop of Rome.

+ During his pontificate, he held two councils condemning the Arian heresy, and another condemning the errors of the priest Apollinaris. Damasus also became the first pope to speak of the “Apostolic See” and he instituted a formal system of Church administration which took the form of decrees, rather than pastoral admonitions.

+ Saint Jerome served as Damasus’ secretary for a number of years and praised him as “an incomparable person, learned in Scripture, a virgin doctor of the Virgin Church.”

+ Pope Damasus was also a poet whose writings, particularly in honor of the early martyrs, show him to be a bright man of great eloquence and sensitivity. He restored the catacombs and had the bodies of many of the early martyrs enshrined in Rome’s churches.

+ Pope Saint Damasus died on December 11, 384. Because of his work in the catacombs, he is popularly honored as the patron of archaeologists.

“The saints themselves forbid anyone to offer them the worship they know is reserved for God, as is clear from the case of Paul and Barnabas. When the Lycaonians were so amazed by their miracles that they wanted to sacrifice to them as gods, the apostles tore their garments, declared that they were not gods, urged the people to believe them, and forbade them to worship them.”—Saint Augustine of Hippo

Grant, we pray, O Lord,
that we may constantly exalt the merits of your Martyrs,
whom Pope Saint Damasus so venerated and loved.
Through our Lord Jesus Christ, your Son,
who lives and reigns with you in the unity of the Holy Spirit,
one God, for ever and ever. Amen.