Wednesday, September 2
Saint of the Day: The Martyrs of September

Victims of the French Revolution 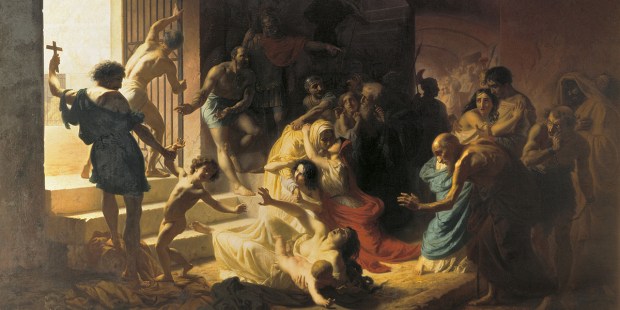 + Following the promulgation of the Civil Constitution of the Clergy in 1790, any cleric or religious who refused to affiliate with the state-sponsored church created in France during the French Revolution was considered an enemy of the Revolution and a traitor.

+ Following this decree, hundreds of monasteries and convents were closed or suppressed and many priests and religious went into hiding.

+ Hundreds of bishops, priests, and men and women religious were arrested, including the 191 martyrs honored today.

+ On the night of September 2, 1792, mobs in Paris heard rumors of a possible mass breakout of those in the prisons. Rising up, the mobs attacked the prisons and massacred more than 1400 men and women in the space of only a few hours. Eyewitness report that the bishops, priests, and brothers housed in four of prisons were treated with extraordinary brutality.

+ The Martyrs of September were beatified in 1926.

+ Among the martyrs was a De La Salle Christian Brother—Solomon LeClercq—who was canonized by Pope Francis in 2016. To date, he is the only one of the martyrs to be declared a saint.

“The saints are men and women who enter fully into the mystery of prayer. Men and women who struggle with prayer, letting the Holy Spirit pray and struggle in them. They struggle to the very end, with all their strength, and they triumph, but not by their own efforts: the Lord triumphs in them and with them.”—Pope Francis at the canonization of Saint Solomon LeClercq

On this day we also remember Blessed Ingrid of Sweden. Following the death of her husband, she traveled to the Holy Land, Rome, and Santiago de Compostela and eventually became a spiritual student of a noted Dominican preacher and writer. She became the first Dominican nun in Sweden and established the first monastery of Dominican nuns in that country. Blessed Ingrid died in 1282.

Grant a joyful outcome to our prayers, O Lord, so that we, who each year devoutly honor the day of the passion of the holy Martyrs of September, may also imitate the constancy of their faith. Through our Lord Jesus Christ, your Son, who lives and reigns with you in the unity of the Holy Spirit, one God, for ever and ever. Amen.