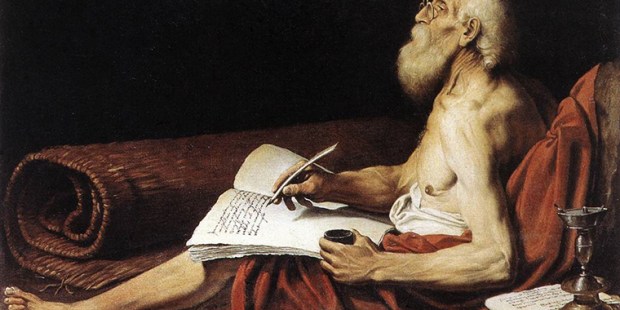 + Jerome was born in northern Italy and received a good education. He learned to write Latin and acquired a love of the classics. In 374, Jerome traveled to the Holy Land and spent time with a group of monks in Calchis. It was during this time that he learned Hebrew.

+ After studying Scripture in Constantinople, Jerome went to Rome, where he served as secretary for Pope Saint Damasus.

+ In 384, Jerome settled in Bethlehem, where his study of Scripture bore great fruit. In addition to translating the Bible into Latin, he composed several commentaries on Scripture and became the spiritual director for a group of nuns under the direction of Saint Paula.

+ Between 410 and 4121, Jerome set aside his studies to provide shelter and care for Roman refugees who had sought shelter in Bethlehem after Saracens invaded Palestine. At that time he wrote, “I cannot help them all, but I grieve and weep with them. Completely involved in the activities charity imposes on me, I have set aside my commentary on Ezekiel and almost all study. For today we must translate the words of Scripture into deeds, and instead of speaking saintly words we must act them.”

+ Jerome died in 420. In 1298, he was named a Doctor of the Church. He is honored as the patron of those who study and teach Sacred Scripture.

“How could one live without the knowledge of Scripture, through which one learns to know Christ himself, who is the life of believers?”—Saint Jerome

O God, who gave the Priest Saint Jerome
a living and tender love for Sacred Scripture,
grant that your people
may be ever more fruitfully nourished by your Word
and find in it the fount of life.
Through our Lord Jesus Christ, your Son,
who lives and reigns with you in the unity of the Holy Spirit,
one God, for ever and ever. Amen.