“Slave of the Blacks Forever” 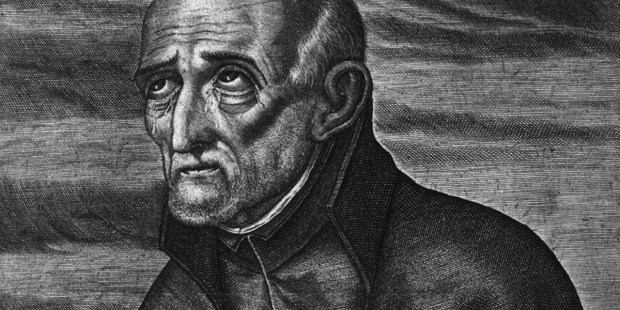 + Peter was born in Verdu, Spain, and entered the Society of Jesus in 1602.

+ After being advised by Saint Alphonsus Rodriguez that he should become a missionary, Peter asked to be sent the Jesuit missions in the New World.

+ Assigned to Colombia, Peter was ordained in 1616. He dedicated his life to serving enslaved Africans, vowing to serve as “the slave of the blacks forever.”

+ Peter enlisted the help of catechists and translators to help in his work and it is said that he baptized as many 300,000 people during his years of ministry.

+ With his Jesuit confreres, Peter worked to defend the dignity of all peoples, despite the widespread acceptance of slavery. Not only did he meet each slave ship as it entered the port of Cartagena, he would also make every effort to visit the plantations and mines where the slaves were sent. He never ceased advocating for their rights and freedom.

+ Peter Claver died on September 8, 1654, and was canonized in 1888 in the same ceremony as his former confrere Saint Alphonsus Rodriguez. Pope Leo XIII named him patron saint of all those who serve black communities.

+ In 1891, Blessed Mary Theresa Ledóchowska and a group of women took religious vows, forming a new religious community: the Missionary Sisters of St. Peter Claver. Dedicated to working among the poor and the proclamation of the Gospel, the Sisters are currently serving in several countries across the globe.

O God, who made Saint Peter Claver a slave of slaves
and strengthened him with wonderful charity and patience
as he came to their help,
grant, through his intercession,
that, seeking the things of Jesus Christ,
we may love our neighbor in deeds and in truth.
Through our Lord Jesus Christ, your Son,
who lives and reigns with you in the unity of the Holy Spirit,
one God, for ever and ever. Amen.