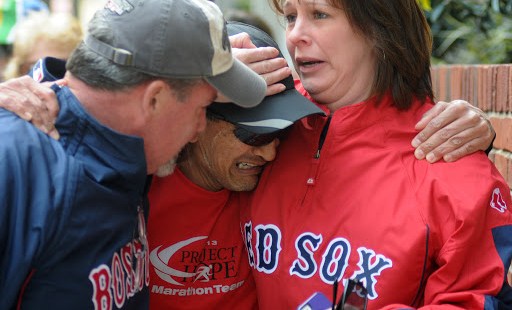 UPDATE 5:37pm Eastern: The NY Post says police have confirmed a third explosion went off at the John F. Kennedy Presidential Library and Museum at 4:30pm Eastern time. It also claims a law enforcement source confirmed 12 people were killed and nearly 50 were injured in the initial explosions.

UPDATE 5:24pm Eastern: Use Google Person Finder to find a loved one at the Boston Marathon with whom you've lost contact.

UPDATE 5:20pm Eastern: The NY Post reports: "Authorities have a identified a suspect, a Saudi national, who is currently being guarded in a Boston hospital with shrapnel wounds."

UPDATE 5:15pm Eastern: AP reports that two more explosives that did not go off were found near the site of the explosions.

CNN reports that at least two explosions occured near the finish line of the Boston Marathon today. The NY Times called it a "series of explosions". ABC has reported that the Boston police have confirmed at least 22 injured and 2 dead from the explosions. The bombs were homemade.

"I saw two explosions. The first one was beyond the finish line. I heard a loud bang and I saw smoke rising," Boston Herald reporter Chris Cassidy, who was running in the marathon, told the newspaper. "I kept running and I heard behind me a loud bang. It looked like it was in a trash can or something…There are people who have been hit with debris, people with bloody foreheads.” A photographer with Fox affiliate WFXT reported seeing a number of victims with lost limbs.

The NY Times reported that "the Boston Police Department confirmed that they were looking into an explosion, but had no further comment."

ABC News has a set of pictures from the scene, and also reports: "Trauma nurse tells ABC News that the race’s medical tent has become a makeshift morgue. Dealing with injuries including severed limbs and children with severe burns."