Prayer Is ‘Negotiating with the Lord,’ Says Pope 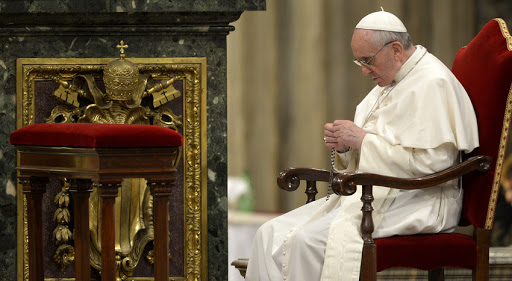 Daily homily from the Bishop of Rome

At his homily for daily Mass at Saint Martha House, Pope Francis called Abraham's bargaining with the Lord for the people of Sodom a model of prayer – a courageous negotiation with God.
“Praying is negotiating with the Lord, even being inopportune with the Lord,” the Bishop of Rome said at the chapel of the Vatican guest-house July 1.
“Abraham is a courageous man and prays with courage,” he said, finding “the strength to speak face to face with the Lord” in an attempt to “defend” the city of Sodom from destruction.
Abraham's willingness to bargain with the Lord – negotiating for the city's safety from finding 50 to only 10 righteous people to spare it – shows us that “prayer must be courageous.”
The Mass was concelebrated by Cardinal Kurt Koch and Bishop Brian Farrell, the president and secretary, respectively, of the Pontifical Council for Promoting Christian Unity. Members and staff of the council attended the Mass.
“When we speak of courage we always think of apostolic courage, going out to preach the Gospel, these sort of things,” the Roman Pontiff stressed.
“But there’s also the kind of courage demonstrated before the Lord … going courageously before the Lord to request things.”
He noted that “it makes you laugh a bit,” and “this is funny because Abraham speaks with the Lord in a special way, with this courage.”
According to Pope Francis, one doesn’t know if this is a man who prays or if this is a “Phoenician deal,” because “he is bartering the price down.”
“And he’s tenacious, from fifty he’s succeeded in lowering the price down to ten.”
“He knew that it wasn’t possible; only that it was right. But with that courage, with that tenacity, he went ahead.”
Abraham's example is “beautiful,” Pope Francis said, because he decided “to convince the Lord with the Lord's own virtues … Abraham's appeal goes to the heart of the Lord and Jesus teaches us the same.”
“The Father, he knows. The Father – don't worry –  sends rain down on the just and the sinners, the sun for the just and for the sinners.”
“Jesus himself praised the woman who tenaciously begged for the healing of her daughter,” reflected Pope Francis, saying that tenacity – persistence – is a virtue in prayer.
“Sometimes one goes to the Lord to ask something for someone, one asks for a favor and then goes away. But that is not prayer,” because “if you want the Lord to bestow a grace, you have to go with courage and do what Abraham did,” praying persistently.
Pope Francis told of how Jesus explained we must pray “as the widow with the judge, like the man who goes in the middle of the night to knock on his friend’s door with tenacity.”
“Tenacity, even though it’s tiring, is really tiresome, but this is the attitude of prayer,” he affirmed. “This is prayer, this is receiving a grace from God.”
But, this negotiating with the Lord “is possible only when there’s familiarity with the Lord,” he said.
The Bishop of Rome advised everyone to spend just a couple minutes every day to become familiar with the Lord, recommending reading Psalm 102 daily: “Bless the Lord, O my soul.”
“Pray all of this psalm,” he taught, “and with this we learn the things we must say to the Lord when we request a grace. ‘You who are merciful and forgiving, grant me this grace': just as Abraham did and as Moses did.”
“We forge ahead in prayer, courageous, and with these motivations which come right from the heart of God himself.”
“Praying is praising the Lord in the beautiful things he shares, and asking him to bestow these beautiful things on us. And (appealing to him) who is so merciful, so good, to help us.”

Originally published at Catholic News Agency on 01 July 2013.  Used by permission, all other rights reserved.