For World Youth Day Pilgrims and Locals, Everything is New 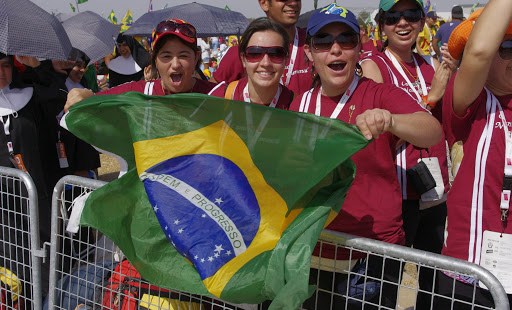 Although Brazilians have seen their share of international events, it’s safe to say that they’ve never seen one like this.

For both pilgrims and locals in Rio, this will be a week of new experiences. Most of the young people from around the world are first-time pilgrims to a World Youth Day festival, and although Cariocas (as residents of Rio de Janeiro are known) have seen their share of international events, it’s safe to say that they’ve never seen one like this.

With Pope Francis now in Brazil, and many other pilgrims continuing to flood the city, there’s been enough time to get a pulse on the city and the international Catholic youth gathering about to get underway.

“It certainly seems like [locals] will be following this on the news,” said Nicholas Ferreira, a tour guide working with JMJ Youth. “Even when we’re just walking along on the street, someone will say, ‘Oh, are you with WYD?’ As always with these events, a lot of folks have pre-conceived notions of what it’s going to mean and the difficulties that may come about. But when the event happens and the young people come and they look in their eyes and experience the spontaneous expressions of pilgrim joy, it’s a transforming experience.”

Ferreira, who served as a guide at WYD in Sydney, Australia, went to Rio last week to learn the lay of the land. He was met up by two youth groups from St. Louis, who were staying with host families in a parish about an hour from downtown Rio.

“We are not tour guides. We are guides and pilgrims,” he said. “As we lead them on to events, we try to create the spirit of pilgrimage for them, and if they’ve visiting churches, we try to remind them of the importance of the churches and the significance of what they’re living. Sometimes it can be a little challenging to stay focused, what with all the logistics. But the pilgrim experience is an important part, and to lead by example with our devotion.”

He noted that while 74% of Brazilians are Catholic, “they need to be strengthened” in the faith. “The Protestant churches are very strong here. They’ve been making large inroads, mainly among those who are baptized Catholic. This event definitely couldn’t come at a better time for the Church here. From what I’ve spoken about with locals a lot of them say, ‘Oh yeah, I was in the Church, but now, no, you know?’ So this will be a chance for them to see what they are missing out on in the Church and what the true spirit of the Church is.”

JMJ Youth is facilitating the trip for about 1,000 North American youth, said director Steve Kerekes. “Three-fourths are first-time WYD pilgrims. A lot of the leadership have done this before – chaperones, etc. They’ve done this several times because they know the effect this has.”

Nolan Reynolds can attest to that. Although he is not with JMJ Youth but is traveling as a youth minister with a dozen young people from Our Lady of Mercy parish in Hicksville, New York, he speaks enthusiastically about the fruits he has witnessed from the two other WYD’s he’s attended – Sydney and Madrid.

“For myself, it’s given me much more of an appreciation of the universality of the Church,” he said. “It’s great that it happens every two or three years because there are times when we feel so alone, we feel like the minority, we feel like this sheepish voice, trying to cry out, in a crazy world, and then you go to WYD and see how alive the Church is and how many there are and  young. That has been such a great source of hope. So many people coming together for a cause unlike any other cause in the world. For me that’s strengthened my hope and been a confirmation of the hope that Christ gives us.”

The other fruit he discusses is a deeper prayer life and an openness to a vocation. “For other people I’ve taken, I’ve seen young people come home changed in a sense that their prayer life exploded. Where before, maybe they prayed a little, but afterward they brought it into their life in a new way,” he commented. “A lot of kids have come back and very seriously considered priesthood and religious life. That’s been a great thing to watch. Not everyone has gone on to become a priest or religious, but they’ve been open to it in a new way because they see it on display. There are so many young, happy, excited, enthusiastic, and holy priests and religious that attend WYD that it changes their lives.”

For Athena Mota de Alcantara, this WYD will be a major “homecoming.”

“My mother is Colombian and my father is Brazilian, so my siblings and I were raised speaking three languages: Spanish, Portuguese, and English,” said the recent graduate from Thomas Aquinas College in California. “As I grew up, I slowly began to understand what an incredible blessing it is to be trilingual. A year ago, my family moved from Southern California to Brazil. It was a big culture shock for us, but it was a great opportunity for us to learn about our heritage. Now that World Youth Day is here, I’m really grateful my family and I were already familiar with Rio and the Brazilian rhythm of life. We are able to talk to pilgrims in three different languages, so we get to meet three times as many pilgrims as our Californians friends who came to visit us for World Youth Day.”

Added Erin Stoyell-Mulholland, a junior at the University of Notre Dame, “This is my first World Youth Day and I am very excited. I am going with the Archdiocese of Philadelphia. I am trying to go into WYD with very little expectations to just see where the Spirit leads. One of the things I am looking forward to the most is just the opportunity to get together with so many other Catholic youths and the community that will be there. I think it is so important for Catholic youths and young adults to be able to find support in their faith and realize there is a larger community out there.”