Hope and Excitement in Rio Slum before Pope’s Visit 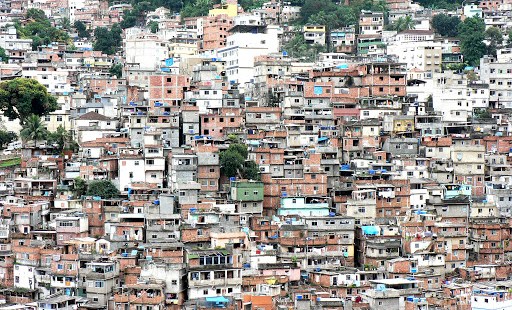 “I want to kiss the Pope’s feet, because I am not worthy that he comes into my home”, 82 year-old Amara Marinho told me on the eve of Pope Francis’ visit to her simple, sparsely furnished home in one of Rio de Janeiro’s ‘favelas’, known in English as ‘shanty town’ or ‘slum-dwelling’.

Amara lives here with her 90-year old sister, Jovenia, just a few minutes walk down the road from the church of Saint Girolamo where the Pope will go first on July 25.

After visiting the church, he will walk 800 yards down the road to the football-field where he the estimated 2,500 people that belong to the Community of Varginha wwill be waiting to greet him. The community is part of the much larger ‘favela’ of Manguinhos where more than 20,000 Brazilians live.

Pope Francis asked to visit one of Rio’s 763 ‘favelas’ during his stay here for World Youth Day (WYD) because he wants to affirm the dignity of the many people who live hard and often difficult lives in these self-made, often precarious buildings, and not infrequently in a climate of violence and criminality. He wants to draw attention to their plight, and push those in authority to work seriously to ensure that the can have better homes, work and hope for the future.

Today, at least one in every five of Rio de Janeiro’s 6 million plus inhabitants (22% of its population) live in favelas.  According to the latest official national statistics (2010), some 11% of Brazil’s 195 million people live in 6,328 favelas, and very many of them are young.

The Argentinean pope knows this situation well and so, by both action and word, he dearly wants to bring hope and encouragement to all who live in Brazil’s ‘favelas’ just as he did to the inhabitants of the ‘villas miserias’ or ‘villas de emergencia’ in Buenos Aires, where he was archbishop  from 1998 until his election as pope. He was a frequent visitor to the city’s ‘villas’ and so when on July 25 he goes in an open jeep to this favela in Rio he will be visiting a reality with which he is deeply familiar.

His visit is creating tremendous excitement here in this ‘favela’ where last January the authorities finally – after a long struggle – managed to overcome the stranglehold of the criminal gangs that held sway here. As a result of this ‘pacification’ process, the police are now visibly present at all entrances to this ‘favela’ as they seek to ensure a more secure life for all its inhabitants and for the two elderly sisters also.

“I just want to tell Pope Francis, ‘I love you!’ ” Amara told me and a group of Spanish-speaking journalists when we visited her home on July 23. She and her sister have a large picture of the Pope hanging on the wall of their home, close to a black-wooden statue of Our Lady of Aparecida.  “I am so excited, so happy, so emotional at his visit that I forget to take the medicines for my heart”, she added. Then, overcome with emotion, she broke down in tears.  When she regained her composure she told us, “I’m not going to change anything here; I want him to see our home exactly as it is!” She even plans to offer him a cup of coffee.

The local parish community, headed by the dynamic Father Marcio, chose the home of the elderly sisters for the Pope’s visit to a family in the favela. The sisters hope to have some of their many grandchildren here when he comes.

Pope Francis’ visit to the elderly sisters combines well with the twin-focus he is pushing here at WYD, where he is highlighting the fact that while society tended in recent decades to ‘discard’ the elderly, today it is doing the same to young people by not providing them with proper health care, good education and – most importantly – a job.  He is telling everyone – in the Church and beyond – that we must all join together to combat this ‘throw-away culture’, this false socio-economic direction in today’s world, and re-affirm once more the dignity and value of each and every human being, whether young or old.