Philippines Government to Push on with RH Law 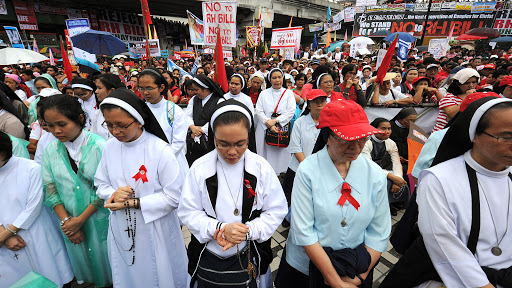 The Health Department on Thursday announced plans to move ahead with the implementation of the Reproductive Health Law, despite a court order suspending it.

The Supreme Court last week extended an order that stalled the controversial law which was passed in December. The suspension came in response to petitions filed by opponents, many of them Catholic.

But Health Secretary Enrique Ona said on Tuesday that the Health Department would effectively ignore the ban and begin rolling out the program, which offers state-funded contraception and sex education.

“There is no law banning [family planning],” Ona said in an interview. “We think it is the responsibility of the government to give mothers and families the choice of how many children they will have.”

The health secretary added that the government has already started to release funds for family planning despite what he called “a temporary setback” with the ongoing court case.

“If you look at what is happening around the world now, the debate on the RH Law will never end because it is a sensitive issue of morality and religious beliefs,” he said.

Ona added that there was no need for a debate because the law does not include provisions for abortion, which remains illegal in the Philippines.

"The main objective of the RH Law is to give poor families and parents scientific information on how one’s family life can be chosen and whether parents would only have one child, or two or three of their own, and the information on how to do it,” he said.

The Philippines has the highest teen pregnancy rate in Southeast Asia. About 5,300 mothers die from child birth every year, according to government figures.

Catholic bishops have opposed implementation of the RH Law because they say that it allows the use of artificial contraceptives and supports abortion.

Bishop Gabriel Reyes, chairman of the Episcopal Commission on Family and Life, has said that Church leaders continue to hope that the Supreme Court will favor the bishops' position.

Originally published at UCAnews on 25 July 2013.  Used by permission, all other rights reserved.