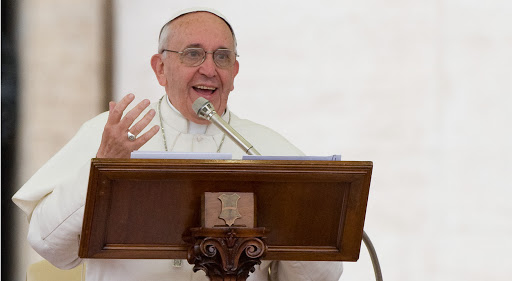 Wednesday audience with the Holy Father in Rome

Reflecting on the recent World Youth Day held in Brazil, Pope Francis said at his General Audience today that hospitality, celebration and mission are reminders of the event that drew millions.

“Three words: hospitality, celebration and mission. These words are not only a reminder of what happened in Rio, they are also the soul of our lives and of our communities that help to build a world of greater justice and solidarity,” Pope Francis said Sept. 4 at St. Peter's Square.

The Bishop of Rome used his first General Audience after a two-month summer pause to reflect on the pilgrimage to Brazil.

“We think about the meaning of the crowd of youths that met the risen Christ in Rio de Janeiro and who carry their love to the life of others each day, they live it, they communicate it,” he said.

“They aren’t going to appear in newspapers, just because they don’t do violent or scandalous things, they are not news.”

“But if they stay united to Jesus, build up his Kingdom, build fraternity and sharing, they are a potential force to make the world more just and beautiful, to transform it!”

He said the experience of World Youth Day is a reminder of “the true, great story of the news, the Good News, although it does not appear in newspapers or television: we are loved by God, who is our Father, and that he has sent his Son Jesus to be close to each of us and to save us.”

The Pope challenged the youths present in the square, commissioning them to have the courage to transform themselves in hope, opening doors “to a new world of hope.”

He had begun his address by thanking God for the providence of having made South America the destination of his first international trip as Roman Pontiff: “For me, coming from the Americas, it was a beautiful gift!”

He also thanked all the Brazilians who made possible the pilgrimage, saying, “the reception by Brazilian families and parishes was one of the nicest features of this World Youth Day.”

“Good people, these Brazilians. Good people!” he remarked. “They have a great heart.”

Noting that pilgrimage “also involves discomfort,” he said the warm hospitality pilgrims received from their Brazilian hosts “helped to overcome this” and transformed it into “opportunities for knowledge and friendship.”

Pope Francis added that the celebratory nature of the event was “a sign for everyone, not just for believers.”

“But then there is the biggest celebration which is the feast of faith, when we praise the Lord together, singing, listening to the Word of God, remaining in the silence of adoration: this is the culmination of World Youth Day, the real purpose of this great pilgrimage.”

He described Mass as the high point in “the great feast of faith and of fraternity, which begins in this world and will have no end.”

“But this is possible only with the Lord! Without the love of God there is no real feast for man!”

It is the celebration of the feast of faith, Pope Francis explained, which leads to the mission of spreading hope and the Gospel.

The shore of Copacabana beach, he said, “suggested the shore of the Sea of Galilee,” where Christ commissioned his first disciples.

“Only through Christ can we bring the Gospel … with him, however, united with him, we can do so much. Even a boy, a girl, who in the eyes of the world counts for little or nothing, in the eyes of God is an apostle of the Kingdom, is a hope for God!”

Pope Francis then renewed his invitation made on Sept. 1, calling on everyone throughout the world and of any religion to fast and pray intensely on Sept. 7 for peace, particularly in Syria.

“Next Saturday we will live together a special day of fasting and prayer for peace in Syria, the Middle East, and throughout the world,” he said. “Even for peace in our hearts, because peace begins in the heart!”

“I renew the invitation to the whole Church to live intensely this day, and even now, I express gratitude to the other Christian brethren, to the brethren of other religions and to the men and women of good will who want to join in this, in the places and ways of their own.”

He said he urged especially pilgrims and Romans to participate in the prayer vigil to be held that day at St. Peter’s Square at 7:00 p.m.

“We plead with the Lord for the great gift of peace. May a powerful cry for peace go up from every land!”

Originally published at Catholic News Agency on 4 September 2013. Used with permission. All other rights reserved.