The Dark Knight of the Soul 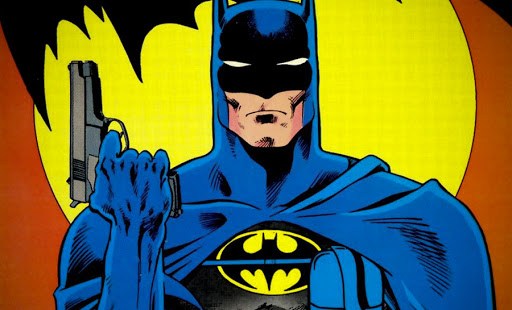 Superheroes remind us of what’s noble in ourselves and show us what we all could be – and should be.

Over the past seven decades, the Caped Crusader has patrolled the mean streets of Gotham City on page, radio, and screen, capturing the imagination of each generation.

The iconic cape and cowl has remained a constant, though the character has evolved, starting in 1939 with creators Bob Kane and Bill Finger’s dime store pulp; to the camp of the 1960s TV show; to the gritty revisionism of Frank Miller; to the neo-noir of Tim Burton; and most recently, the operatic, post 9/11 realism of director Christopher Nolan’s “Dark Knight” film trilogy.

As David Finkelstein and Ross MacFarlane wrote on the occasion of the hero’s 60th anniversary, “Batman is a figure blurred by the endless reinvention that is modern mass culture. He is at once an icon and a commodity; the perfect cultural artifact for the 21st century.”

And it’s no longer just the Comic Con crowd showing interest, as evidenced by the Vatican’s website recently posting an article on Batman and, earlier in the year, an editorial in the Holy See’s de facto newspaper, L’Osservatore Romano, conjecturing that Batman is a Catholic.

Perhaps even Batman himself, dubbed “the world’s greatest detective,” would be stumped in trying to explain his own enduring appeal. Some would point to his humanity and self-made moxie as a reason – that his not being able to leap over tall buildings in a single bound makes him more relatable.

“To be blunt, the guy isn’t very super. He didn’t gain his powers by being lightening-struck, nor bathing in chemicals, nor by dint of being born on another planet,” notes longtime Batman writer and editor Dennis O’Neil in “Tales of the Dark Knight” a history of Batman’s first fifty years. “He got them the old-fashioned way – he earned them.”

Sure, Bruce Wayne is “super” wealthy, which helps in financing his alter-ego’s nocturnal activities. And yes, he’s achieved a level of peak physical and mental ability through a lifetime of training and self-discipline. But at the end of the day, he’s simply a guy in a cape whose only “power” is his single-minded sense of mission.

Yet, more than any other costumed crime-fighter, he remains a paradox – the most like us, and yet wholly “other.” It is precisely that sense of mission – forged by the life-transforming tragedy of his parents’ murder – that makes Batman something else, something beyond us, something different, both inspiring and terrifying.

Suddenly orphaned and alone, a chilling event took place. There would be no grieving for the child. No time would be lost wishing he could change the events. There would be only the promise. That very night, on the street stained with his mother and father’s blood, he would make a vow to rid the city of the evil that had taken their lives.

Part of what makes Batman so compelling is what he represents: a life entirely lived for others, without desire for recognition or reward. You could say he is radically, almost existentially different than us in his identification with his freely chosen role as Gotham’s guardian.

“It’s what I do that defines me,” Christian Bale’s Dark Knight says in Nolan’s seminal 2005 film, “Batman Begins.” But as Nolan asks in that movie and its two sequels: is Gotham City worth saving? Nolan remains ambiguous, but in the final analysis suggests that Batman is committed to defending even those who don’t deserve it, and even at great personal cost.

This self-sacrificing dedication has prompted author and theologian Fr. Robert Barron to refer to Batman, in his review of Nolan’s 2012 “The Dark Knight Rises,” as a “Christ archetype” – a good shepherd of sorts willing to lay down his life for his flock. Others have drawn references to the suffering servant of Isaiah. Fr. Barron, however, is careful to point out the analogy only goes so far: Batman employs violence; Christ absorbed it in Divine love and mercy.

Commenting on Fr. Barron’s review, Catholic blogger Harrison of The Christian State of Life, adds that Batman’s endless war against evil, however noble, is always doomed to failure and reveals the important theological truth that “man’s attempt to save himself will always come up short.”

Still, Fr. Barron sees Batman as a potentially useful, if flawed, figure in leading a secularized culture back to our real Savior, Jesus Christ.

On a more basic, archetypal level, Batman is the pop-cultural equivalent of the medieval Christian knight, sworn to safeguard the powerless, bound by a personal code of justice. In fact, one of the most fascinating aspects of Batman is how he tempers his (and by extension, our) darker impulse for vengeance with his ironclad prohibition against killing.

Nolan has said that Batman walks a “moral razor’s edge,” but never crosses it, weakening the argument of some that he is a revenge fantasy, a grim reflection of our shadow side (to use the Jungian term). Rather, tapping into more overt religious iconography, Batman is often depicted standing watch atop a citadel, suggestive of a guardian angel or a stone gargoyle warding off evil from a cathedral spire.

In a world rife with geo-political anxieties and financial uncertainty, Batman – along with other superheroes – provides a comforting symbol of hope and longed-for security that is non-intimidating to secular sensibilities, and serves as a useful metaphor in an age of disbelief.

Apart from the western gunslinger, superheroes are the closest thing America has to a popular mythology. The pantheon of Superman, Batman and their ilk are the modern heirs to Hercules and Achilles, often overlaid with Christological elements, including “messianic secrets,” as Jesuit film critic Fr. Richard Leonard pointed out in his America Magazine article, “More Than Super.”  Like their Olympian progenitors, they serve a similar purpose for finding meaning in a scary threatening world.

“Superheroes fill a gap in the pop-culture psyche,” Nolan has stated repeatedly. “There really isn’t anything else that does the job in modern terms.”

Diverse voices, from Carl Jung to J. R. R. Tolkien and Hans Urs Von Balthasar, have defended the importance of myths in modern culture. C. S. Lewis credited classical and Norse mythology for paving the way to his faith conversion.

Certain superheroes, Batman included, transcend comic books and have attained modern mythological status, and as with all authentic myths can serve as a prelude to what C.S. Lewis called “the true myth” of the Gospel.

At their literary or cinematic best, these stories can explore important and relevant questions about good and evil. They provide moral clarity in our morally confused age. Superheroes are ideal avatars for engaging a post-modern secular culture groping in the dark without a moral compass and that has largely grown deaf to, what William Faulkner called, “the old verities,” such as honor, moral courage, and sacrifice.

As the Catholic novelist Flannery O’Connor observed, “To the hard of hearing you shout, and to the almost blind you draw large and startling figures.” Superheroes are just that.

Which brings us back to Batman, perhaps the most startling figure of them all.

There is something primal about Batman. Who hasn’t at one point felt powerless like young Bruce Wayne and dreamed of being more in control? Batman was born through a violent act, but it’s his response to that traumatizing violence that makes him not just relatable, but inspirational.

“Why do we fall?” Thomas Wayne asks his young son Bruce in “Batman Begins.” “So we learn to pick ourselves up.” A noble, if tad Pelagian, sentiment.

Vigilante-style violence – forget Miranda rights! – certainly plays a role in his crusade against crime (alarmingly more so in modern graphic novels), but it is not Batman’s defining trait. Nor is revenge, as is often accused. Rather, it is his all-consuming altruism. As veteran Batman scribe Alan Grant has said, it is “a love of people” that is the mark of any “real Batman tale.”

Ultimately, the power and popularity of Batman resides in what he symbolizes. “A man is just flesh and blood, and can be ignored or destroyed. But as a symbol… as a symbol I can be incorruptible … everlasting,” Christian Bale says in “Batman Begins.” And what does he symbolize? Order in a disordered world. Virtue in an age of moral laxity. Simply put, Batman represents standing up for what is right.

In their essay, “Heroes and Superheroes,” Jeff Loeb and Tom Morris observe, “In a culture of pervasive self-interest and self-indulgent passivity,” superheroes serve as “a rebuke to the rest of us for our unconcerned inertia and thus complicity in the face of the many evils in the world.”

Those who acted heroically during the tragic 2012 Aurora shooting, at the midnight screening of “The Dark Knight Rises,” might take issue with that “rebuke,” as might those ordinary folk who perform daily acts of simple heroism, without need of cape, cowl or utility belt. But, undeniably, apathy and complacency still exist.

One need look no further than the recent tragedy of Michael Thornton, a young man in England who drowned because paramedics refused to jump into the water to help him after his car became submerged in a ditch. British coroner Michael Rose railed against their  “unconcerned inertia” (to borrow Loeb and Morris’ phrase), saying, “I was brought up in country where men risked their lives to save the lives of others. That was a period in our history which has almost ceased.”

Perhaps the power of the bat signal illuminating the darkened sky is that it literally summons us to raise our gaze from our own selfish needs to a higher purpose. But it also makes us look within.

G.K. Chesterton once remarked that heroes are more human than the rest of humanity. Maybe we are drawn to superheroes like Batman not for their extraordinary powers, but because they remind us of what is most noble in each of us, and show us who we could be – and should be.

Perhaps Christian Bale’s Batman says it best: “A hero can be anyone.”