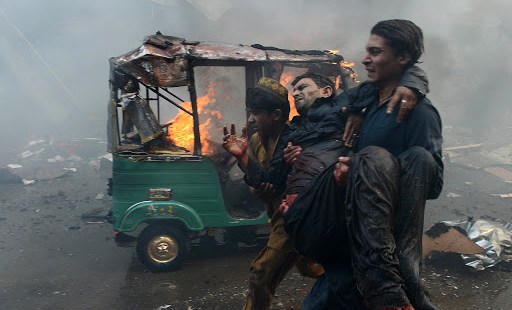 Peshawar suffers its third attack in a week

At least 40 people, including 18 members of one family, were killed and scores of others wounded when an explosive-laden car exploded Sunday in Pakistan’s restive Peshawar.

The deadly blast occurred at the city’s historic Qissa Khawani bazaar, and comes a week after a pair of suicide bombers blew themselves up at 130-year-old All Saints Church in Peshawar. That attack killed 85 people and injured nearly 150.

The bazaar lies just a few streets away from the church. At the time of yesterday’s explosion a special Sunday Mass was underway for victims of the previous suicide bombing. Television footage showed the terrified faces of those attending the Mass in the church following the huge blast.

Police say they have launched a probe into Sunday’s attack.

“Around 225 kilograms of explosives, including ball bearings and metal pieces, were used in the blast to inflict maximum damages,” Shafqat Malik, Assistant Inspector General, told reporters.

“The bomb was planted inside a white car, which was detonated with a remote-controlled device,” he said.

“The number of people killed in the blast has reached 40 with more than 100 others injured,” Syed Jameel Shah, a hospital spokesman, told ucanews.com. He feared the death toll could rise as 11 of those injured were still in critical condition.

According to media reports, 18 members of one family, who came from neighboring Charsadda district to give invitations for a wedding party, were killed by the blast.

Traders at Qissa Khawani bazaar called for a strike after more than 80 shops were damaged.

It was the third major bomb blast in Peshawar since last Sunday, claiming more than 140 lives in total.

On Friday, 19 people were killed when a bomb hit a bus carrying government employees.

A day earlier, cricketer-turned-politician Imran Khan, who leads a coalition government in the province, called for the opening of a Taliban office to hold peace talks. He suspected that the recent surge in terror attacks was aimed at sabotaging the proposed peace talks.

“Those involved in the killing of innocent people are devoid of humanity and all religions. The barbaric acts of terrorism could not deter the government’s resolve to ensure peace in the country,” he said.

Separately, a missile fired from a US drone killed three suspected militants in North Waziristan region on Sunday.

Originally published at UCAnews on 30 September 2013. Used with permission. All other rights reserved.