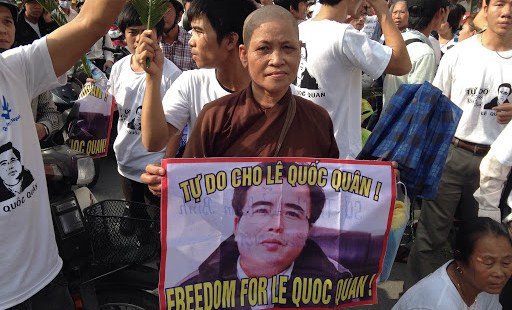 Le Quoc Quan is given 30 month sentence amidst protests against communist state’s crackdown on dissent.

One of Vietnam's best known dissidents was jailed for two and a half years on Wednesday as hundreds of supporters protested in the capital against the communist state's crackdown on dissent.

Scores of police formed a ring around the Hanoi People's Court, where lawyer and blogger Le Quoc Quan was convicted of tax evasion. The charges have been denounced by international rights campaigners as politically motivated.

The 42-year-old was also given a $59,000 fine, court president Le Thi Hop announced after a half-day trial in Hanoi.

"I am the victim of political acts," Le Quoc Quan told the court, denying the charges.

"I will continue my fight against corruption, attacking bureaucracy and stagnancy that are undermining our country," he added.

When the verdict was announced, Le Quoc Quan shouted "I object" before the television feed into the observation room where reporters were sitting was cut off.

Le Quoc Quan, who blogged on a range of sensitive topics including civil rights, political pluralism and religious freedom, has been in detention since last December.

His lawyer, Ha Huy Son said there were "no grounds to prosecute" the popular blogger over tax evasion.

Rights groups estimate hundreds of activists are locked up in Vietnam for speaking out against authoritarian communist rule, including at least 46 jailed this year.

"The Vietnamese government appears to be so nervous about its position in society that it is reflexively finding ways to silence and imprison dissident after dissident," said Brad Adams, Asia director at New York-based Human Rights Watch.

The scale of the protest was unusual in Vietnam, where authorities keep a tight lid on dissent.

Ahead of the hearing, activists said that they were being kept under virtual house arrest in a bid to prevent them from staging protests near the court.

Le Quoc Quyet, the lawyer's younger brother, said before the verdict that he and his sister were prevented from marching to the court.

"We request to watch the trial but police stop us," he said.

There was "some violence, the police hit, they kick some people," he added.

Hundreds of confused commuters were caught up in the rally, with police forcing buses to turn back as they closed main roads to keep protesters from getting close to the courtroom.

Vietnam — where the Communist Party forbids all political debate — is regularly denounced by rights groups and Western governments for its intolerance of political dissent and systematic violations of freedom of religion.

US officials said in June that Vietnam was holding more than 120 political prisoners.

Reporters Without Borders said in July that Vietnam was second only to China in the number of bloggers it detained.

Another prominent Vietnamese blogger, best known by his pen name Dieu Cay, was charged with tax evasion in 2008.

Dieu Cay, whose real name is Nguyen Van Hai, was given 30 months in jail.

He was not released after completing the sentence and was later charged with conducting anti-state propaganda and sentenced to 12 years. AFP

Originally published at UCAnews on 3 October 2013. Used with permission. All other rights reserved.