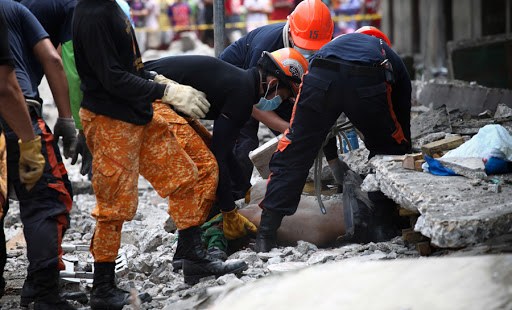 At least 142 people died, 276 were injured and more than 2.8 million people were affected by the 7.2 magnitude earthquake that struck the central Philippines on Tuesday.

"This is really a disaster. We are doing our best to restore normalcy in the affected areas," Lt Gen Roy Deveraturda, commander of the military's disaster response and relief operations, said during a press briefing on Wednesday.

Authorities expect the number of fatalities to rise as rescue and retrieval operations, especially in areas where landslides occurred, continued on Wednesday.

Deveraturda said at least five people remained missing in Tagbilaran City, capital of Bohol province, where the epicenter of the earthquake was located.

Families camped outside over night for fear of falling debris caused by strong aftershocks. As of Wednesday morning, the Philippine Institute of Volcanology and Seismology reported 725 aftershocks.

"I did not sleep. I just contented myself watching my family trying to have rest as the tremor went on," said Lure Dumaluan, a resident of Tagbilaran. "We're evacuees on our own ground," she said.

The incoming president of the Philippines Bishops' Conference urged the faithful to be "more charitable" by helping those affected by the earthquake.

"We are saddened because many lives were lost and many people are now suffering … but our sadness should be turned into prayer, then prayer should then be translated into charity," said Archbishop Socrates Villegas of Lingayen-Dagupan.

Rey Balido, spokesman of the National Disaster Risk Reduction and Management Council, said most of the fatalities were from the worst hit provinces of Bohol and Cebu.

Most of the victims were pinned down by falling debris he said at a press briefing in Manila.

The council pegged the number of affected population at 2,841,956 individuals.

Classes in all elementary and high schools in eight areas in the central Philippines have been suspended, pending the inspection of school buildings. The suspension will affect at least 4,000 elementary and secondary school students.

The Department of Public Works and Highways said at least 18 bridges collapsed.

The 7.2 magnitude quake destroyed centuries-old churches, private and government facilities, and other infrastructure, mostly in Bohol and Cebu.

The Philippine archipelago is located in the Pacific “Ring of Fire,” where earthquakes and volcanic activity are common.

In yesterday's earthquake, four centuries-old churches, which were declared by the government as "national cultural treasures," were damaged.

The National Commission for the Culture and Arts appealed to the public to stay away from the damaged churches to keep them safe and minimize damage.

“It has never happened that this kind of disaster has caused so much damage to our cultural treasures," Trixie Angeles, commission legal consultant, told ucanews.com. She said the last major earthquake that hit the area was in 1700.

Bishop Leonardo Medroso of Tagbilaran said Masses in affected areas will be celebrated in makeshift tents. He said it is up to the priests whose parishes were damaged "to improvise."

"Masses can be celebrated in a different place adjacent to the church," said Father Genaro Diwa, executive secretary of the Commission on Liturgy of the bishops' conference. "There is no reason to disrupt the Masses."