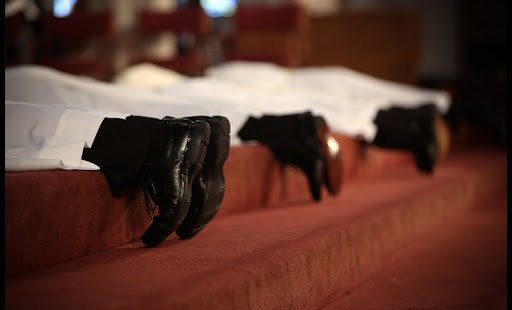 Archbishop Paul Coakley of Oklahoma City shares the details of a multi-year vision of holiness and mission for his archdiocese.

In an Oct. 7 pastoral letter entitled “Go Make Disciples,” Archbishop Paul Coakley of Oklahoma City offered to the members of his archdiocese a multi-year vision of holiness and mission.

“The whole language of discipleship is not something that perhaps has been well understood or very much emphasized, but I think it's something that we really have to latch onto,” the archbishop told CNA Oct. 15 in a discussion of the pastoral letter.

“'Go make disciples', that's a vision for the Church that is perennial, and is not so much time-bound, but it is my intention to really, over the course of the next five years, focus our attention in that direction.”

Archbishop Coakley's pastoral letter identifies three priorities in relation to discipleship, with specific goals in those areas to be worked towards in the next few years.

The pastoral letter explains that it is a fruit of the Year of Faith, an event which prompted the archbishop to prayerfully discern a vision for the archdiocese shared with his flock. The Church of Oklahoma City held a series of “listening sessions” which allowed people to share their needs and challenges, as well as dreams for the archdiocese.

“We gained a lot from that,” he said, and the archdiocese was able to “see what the Spirit was prompting, through all of this.” They also examined demographic data to anticipate the needs of the local Church.

Archbishop Coakley wrote that sanctification is “the principle and foundation of the Christian life, of all pastoral planning and pastoral work … God creates us for holiness. God calls us to become saints.”

He had written, “holiness is not the prerogative of an elite few. It is the fundamental vocation that every Christian receives in baptism,” and reflected that holiness is not privatized or individualistic, though its expression is unique to each person.

“I'm trying to speak to the distorted understanding of what holiness means,” Archbishop Coakley explained. People often “equate sanctity with piety, and certainly, saints are pious people, but I think genuine holiness is much more robust than that.”

“Holiness has to be attractive, if it's going to be compelling,” he said, adding that a genuine holiness “will be attractive.”

In families, he explained, holiness is a matter of mothers and fathers raising and forming their children, and sacrificing for them. It is a call to communion, service, and mission, not merely to piety.

The call to mission led him to write about the new evangelization, noting that “we all know many people today who are nominally Christian or nominally Catholic … rather than evangelizing the culture, that is, transforming the culture according to the truth, beauty and goodness of the Gospel, many Christians are being ‘evangelized’ by the anti-gospel values that the secular and atheistic culture espouses.”

Archbishop Coakley said that even in Oklahoma, home to the Bible belt's buckle, the people are “not immune to the influence of secularism” and that the new evangelization is indeed needed there.

We “need to bring our own Catholic people to a deeper conversion; that's true everywhere, undoubtedly, but what we heard people yearning for, is a deeper experience of their own faith,” he said.

He explained that in the listening sessions, people expressed particular concern for youth in danger of “falling away” from the faith.

“I can't say people were actually familiar with the language that has become all-too-common in magisterial teaching about the new evangelization, and things of that sort, but I think what we heard people asking for was precisely that: a deeper encounter with the person of Christ.”

Archbishop Coakley wrote that to carry out evangelization, we ourselves must first be evangelized, and fall in love with Christ. He quoted Fr. Pedro Arrupe, a late superior general of the Jesuits, and then wrote that “only the disciple can effectively evangelize others.”

“Discipleship leads to evangelization,” he wrote. “Mature disciples become disciple-makers. They become missionary disciples … this is the vision I set before you today: Go make disciples!”

This vision, the pastoral letter explained, will be supported by three priorities, each of them with two goals: new evangelization; faith formation; and Hispanic ministry.

The archdiocese has already achieved its first new evangelization goal – the creation of a new evangelization office in its chancery. It is headed by Carol Brown, the archbishop said, and they are now working out how she will collaborate with other staff “to bring a certain concern for making disciples to bear upon all that we're doing.”

“Actually,” he reflected, “that vision, go make disciples, is precisely that. It's a kind of prism that we have to learn to look through, in all that we're doing.”

The faith formation priority includes goals of transforming catechesis of youth, as well as increasing participation in adult faith formation opportunities. While not having a “roadmap” for these goals just yet, Archbishop Coakley said that “everything's possible” and that they have looked at a number of models “to re-invigorate our faith formation.”

The archbishop said his Church implemented the summer youth program “Totus Tuus” just last year, and is open to other programs as well, including “Prayer and Action,” a local service and mission program begun in the Salina diocese, where he was bishop from 2004 to 2010.

“Prayer and Action is a wonderful model that I would like to consider as we move forward,” he said. “It's certainly proven to be very effective in Salina.”

As for the priority surrounding Hispanic ministry, the archdiocese plans to alleviate overcrowding in Hispanic parishes and to improve Spanish-language adult faith formation.

The archdiocese already has a task force looking at these concerns, and Archbishop Coakley indicated that “there may be some re-configuring of Mass schedules, adding more Spanish Masses in some places,” and even the “real possibility” of “establishing a new parish” in a densely Hispanic area of the Oklahoma City metropolitan area.

The Spanish-speaking population in the metro area “can't be ignored,” he said, and the largest Hispanic parish has already been entrusted to a congregation from Mexico; but the phenomenon is spread across the whole of the archdiocese.

Archbishop Coakley also emphasized that Hispanic ministry is not just about facility with the Spanish language, but also a knowledge of the culture and “the heart of the people,” and so his seminarians are learning Spanish as well as going on immersion to heavily-Latino areas.

The archbishop is hopeful that the initiatives will see a “fruitful response.”

He said he was “very confirmed” in the prayerful discernment of “go make disciples” as a theme, particularly when Pope Francis “used that very language at World Youth Day in his closing homily …. so I think the alignment of what we're trying to do aligns well with what the Spirit has been trying to do in the Church for a number of years … through the teaching of Pope Francis, and Benedict, and Blessed John Paul II before him.”

“We're not trying to create something new, but trying to certainly make sure that what we're trying to do aligns well with the Gospel and with the teaching of the Church,” he explained.