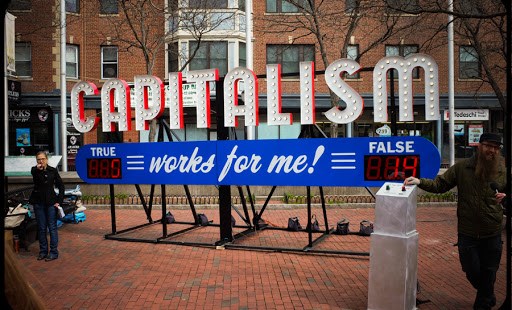 People forget that capitalism is the eldest child of classical liberalism, and it works against many of the very things held most dear by social conservatives.

My wonderful Aleteia colleague, Fr. Dwight Longnecker, recently wrote an article asking the question, “Is Catholicism Conservative?” The piece was a favorable review of two new books by prominent Catholic intellectuals: Tea Party Catholic – The Catholic Case for Limited Government, A Free Economy, and Human Flourishing, by Samuel Gregg of the Acton Institute; and Writing from Left to Right – My Journey from Liberal to Conservative, by the theologian Michael Novak, author of the seminal 1982 book, The Spirit of Democratic Capitalism. Both books offer a robust defense of American-style capitalism and attempt to square that system with Catholic Social Teaching as developed since Pope Leo XIII’s Rerum Novarum. Though Fr. Longnecker didn’t explicitly answer his title question, he seemed to conclude that Catholicism does indeed favor “conservatism,” at least as defined by Gregg and Novak. I’d like to offer a different point of view, and I’ll begin by asking a question quite different than the one posed by Fr. Longnecker: Is capitalism conservative?

In the run-up to the 1980 National Republican Convention that nominated Ronald Reagan for president, the columnist George Will wrote, “The Republican platform of 1980 stresses two themes that are not as harmonious as Republicans suppose. One is cultural conservatism. The other is capitalist dynamism. The latter dissolves the former. Capitalism undermines traditional social structures and values. Republicans see no connection between the cultural phenomena they deplore and the capitalist culture they promise to intensify.” Will was highlighting a truth that genuine conservatives used to know – namely, that capitalism, the eldest child of classical liberalism, is a revolutionary force that scours society of its traditional underpinnings, including religion, upends centuries of received wisdom, and destroys long-established social arrangements.

Joseph Schumpeter, the 20th Century Austrian-American economist, called this phenomenon “creative destruction,” which he defined as a “process of industrial mutation that incessantly revolutionizes the economic structure from within, incessantly destroying the old one, incessantly creating a new one.” Schumpeter knew well that the creative and destructive forces unleashed by capitalism could not be contained within the sphere of economics, but must inevitably wash over into the social and even moral life of a nation. “Capitalism inevitably and by virtue of the very logic of its civilization creates, educates, and subsidizes a vested interest in social unrest,” he wrote.

Michael Ledeen, the contemporary neoconservative philosopher, has approvingly described capitalism as a “menace” aimed squarely at tradition. “Creative destruction is our middle name,” he writes, “both within our own society and abroad. We tear down the old order every day, from business to science, literature, art, architecture, and cinema to politics and the law. Our enemies have always hated this whirlwind of energy and creativity, which menaces their traditions (whatever they may be).”

Mises held traditional religion in contempt, and especially Catholic Christianity, because it resisted the revolutionary force of capitalism. “A living Christianity,” he wrote, “cannot exist side by side with, and within, capitalism.”  On the contrary, according to Mises, liberalism had “transformed the world more than Christianity has ever done. It restored humanity to the world and to life. It awakened forces which shook the foundations of the inert traditionalism on which Church and creed rested.”

For decades, those who considered themselves conservatives recognized the destructive power of capitalism and case a wary eye toward it. The founder of modern conservatism, Russell Kirk, while still advocating a capitalism attenuated by religion and culture, nevertheless acknowledged that capitalism had “turned the world inside out. Personal loyalties gave way to financial relationships. The wealthy man ceased to be magistrate and patron; he ceased to be neighbor to the poor man; he became a mass-man, very often, with no purpose in life by aggrandizement. He ceased to be conservative because he did not understand conservative norms, which cannot be instilled by mere logic – a man must be steeped in them. The poor man ceased to feel that he had a decent place in the community; he became a social atom, starved for most emotions except envy and ennui, severed from true family-life and reduced to mere household-life, his old landmarks buried, his old faiths dissipated.”

In The Quest for Community, the 20th Century conservative Robert Nisbet noted that the tradition-scouring effects of capitalism take their toll first on the institutions of civil society – churches, associations, guilds, and so on – thereby paradoxically enabling the explosive growth of the bureaucratic State. “Unfortunately, it has been the fate of these external institutions and relationships to suffer almost continuous attrition during the capitalist age,” he wrote. “First the guild, the nucleated village, and the landed estate underwent destruction. For a long time, however, the family, local community, tangible property, and class remained as powerful, though external, supports of the economic system which the rationalists saw merely as the outcome of man’s fixed instincts and reason. But, in more recent decades … even these associations have become steadily weaker as centers of security and allegiance… and in this whole process, the directive role of the political State becomes ever greater.”

Is capitalism “conservative?” By its very nature, and given its provenance as the product of the classical liberalism that sprang from the Enlightenment, the answer must be a firm “No.” But, some may ask, what about free markets, property rights, limited government, and the like? Certainly, these are things valued by genuine conservatives and enshrined in the authentic social teaching of the Church. But it’s important not to conflate these goods with capitalism per se.  As John Médaille, a professor at the University of Dallas, points out in his book, Toward a Truly Free Market, capitalism depends on three factors – the narrowing of markets, the concentration of economically productive property, and big government – if it is to work. “History shows,” Médaille writes, “beyond any reasonable doubt, that the growth of capitalism and the growth of government go hand in hand. Capitalism and big government are not, as in the popular imagination and the economic treatises, things opposed; rather, the one grows on the back of the other, and the more you get of one, the more you will need of the other.” Socialism and capitalism are mirror systems: both rely on concentrations of economic power – one in public hands, the other in private hands. Both alienate the worker from his work. Both undermine civil society and create social turmoil. And both result in the commodification of human life and culture.

In 1971, on the 80th anniversary of Rerum Novarum, Pope Paul VI published an apostolic letter in which he lamented the resurgence of “philosophical liberalism,” which has at its “very root … an erroneous affirmation of the autonomy of the individual in his activity, his motivation and the exercise of his liberty.” The Promethean dynamism at the heart of capitalism long ago washed over into the social and moral life of the West. The classical liberalism of the 18th and 19th centuries became the pelvic liberalism of the 20th and 21st centuries because both were and are based on the same “erroneous assumption” about man. George Will was right in 1980. Genuine conservatives – those who care about traditional morality, religion, family, culture, and community – ought to recognize that the very forces they enable by their uncritical support for capitalism are the forces that threaten the way of life they cherish.