World Leaders and Everyday Citizens Come Together for Mandela’s Funeral 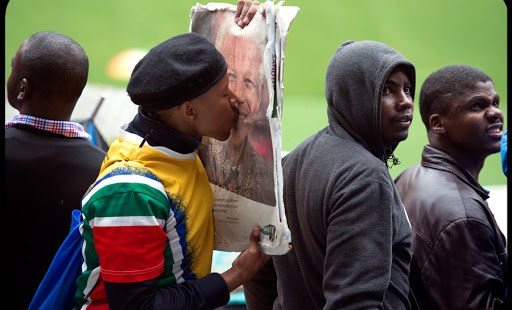 Everyday citizens and world leaders alike gathered under rainy skies in Johannesburg on Tuesday to bid a final farewell to Nelson Mandela. And although the less-than-ideal weather produced a smaller crowd than what South African officials had originally expected, it wasn’t enough to dampen the spirits of some who were clearly determined to celebrate Mandela’s legacy with joyous dance and song – even within the very venue where political dignitaries from around the world (Pres. Barack Obama included) were rendering tribute to “Mandiba.”

The crowds were in no way hesitant to express their raw emotions as the various speakers approached the podium: former Pres. George W. Bush and current South African Pres. Jacob Zuma both received jeers when their images appeared on the large screens in FNB Stadium. Barack Obama, on the other hand, was greeted with raucous cheers and applause.

But a still more iconic phrase to sum up the day’s events would be one of Mandela’s own: “The sun shall never set on so glorious a human achievement.”