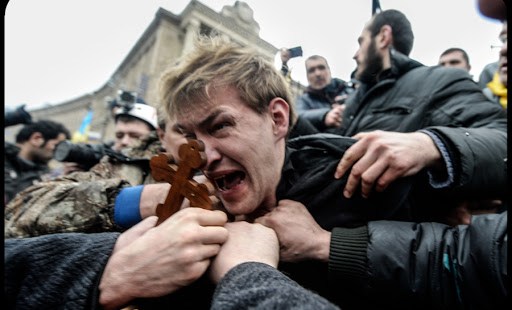 “Faithful of all denominations are praying all the time,” he said. “Please pray with us for peace in Ukraine.”

The Ukrainian Greek Catholic patriarch decried the deadly conflict between the government and protesters, calling for prayer and fasting amid increasing tensions.

Patriarch Sviatoslav Shevchuk on Feb. 20 said the Ukrainian Greek Catholic Church condemns “all incitements to violence, because they are contrary to God’s law and to the truths of the Gospel.”

“No one can make decisions about sacrificing human lives,” he said, according to the Ukrainian Greek Catholic Church’s website.

He also expressed the Church’s desire to be “builders of peace,” rejecting the armed struggle and urging the condemnation of those who shoot unarmed civilians.

Violence continued between Ukraine’s government and protesters in the national capital of Kiev.

At least 21 protesters were killed Feb. 20, according to the BBC. CNN said that protesters’ medical officials claimed that more than 100 people died in Thursday’s fighting. Another 28 people died in clashes on Feb. 18.

The Ukrainian president Viktor Yanukovych and opposition leaders had agreed on a truce on Wednesday.

Protesters in Kiev’s Independence Square have thrown rocks and firebombs at police. At least one protester fired a shotgun in the direction of police lines, CNN reports. The government has accused protesters of killing one police officer and taking about 70 other officers hostage.

Government security forces have been accused of shooting protesters with automatic weapons and at least one sniper rifle. One doctor told CNN she had treated 13 people she believes were targeted by professional snipers, on the grounds that the shots directly targeted victims’ hearts, brains and necks.

CNN video recorded a medic working to help an injured man being wounded by gunfire.

The Medical University of Lublin in Poland has given medical care to 85 victims of the violence, the Ukrainian Greek Catholic Church reports.

The Kiev mayor has resigned from Ukraine’s ruling party and reopened Kiev’s mass transit system, which the government had shut down to keep protesters from Independence Square, also known as the Maidan.

The Ukraine protests first began after the government’s Nov. 21 announcement that it would not sign a major economic partnership agreement with the European Union, in favor of a $15 billion bailout agreement with Russia. Tens of thousands of protesters have filled the streets of Kiev and at times occupied government buildings.

The conflict has drawn international attention and has increased tensions between Russia, which sides with the government, and the U.S. and the European Union, which are siding with the protesters.

The Lviv-based Ukrainian Catholic University on Feb. 20 said that Bohdan Solchanyk, a lecturer in modern history at the university, was among those killed in the violence. The university’s website described him as “our dear friend and colleague” and expressed “sincere condolences” to his family and friends.

“May his soul rest in peace,” the university said.

Auxiliary Bishop Stanislav Shyrokoradiuk of the Latin-rite Diocese of Kyiv-Zhytomyr told the international Catholic charity Aid to the Church in Need that he had gone to Maidan Square after hearing of the deteriorating situation.

“I went there to offer my priestly service and spiritual support to the people in need. We do not make a difference whether someone is Catholic or not. Faithful of all denominations are praying all the time,” he said Feb. 19. “Please pray with us for peace in Ukraine.”

Capuchin friars were helping care for the injured. Many Kiev churches, both Catholic and Orthodox, rang their bells to call people to pray for peace.

Two tents in Independence Square had served as chapels where Christians of all denominations prayed for peace.

However, the chapel tents burned down during the Thursday fighting, though there was no direct attack on them. Just minutes before the fire, the statue of Our Lady of Fatima had been moved to a stage for worship, Bishop Shyrokoradiuk said Feb. 20.

Rosary recitations, a longtime feature of the protests, continue daily at 3 p.m.

The bishop said the great solidarity shown among the protesters is comforting. The people are sharing clothing, blankets and food, comforting each other and supporting each other spiritually regardless of religious denomination. Many are donating blood.

St. Alexander’s Cathedral, the main Roman Catholic church in Kiev, is serving as a hospital.

The Ukrainian Catholic University released a Feb. 19 statement in response to Tuesday’s violence, praying for those who died.

“Let the Lord accept them into the kingdom of heaven, let Him heal the numerous wounds with His merciful hand, let Him relieve the pain of the people who have once again been deceived by the authorities!”

The university said responsibility for the escalation “rests solely on the government” and President Yanukovych.

“Every case of escalation, each more striking in its complete absurdity, slashes our hopes for a peaceful and wise solution to the crisis and brings us closer to a humanitarian catastrophe,” the university said.

The university urged efforts to overcome social tensions and stressed the need to be “faithful to God’s commandments.” The university said it aims to be “an island of peace and reliable support to all those who defend the national interests of Ukraine.”

The university said its leadership and faculty are in solidarity with the students’ national strike.

“We live in one community and share the same values.”

The university said it would work to cultivate self-management, saying that universities have to become “a mainstay in the formation of a new framework for education and social life in general.”

The university also prayed for Ukraine, saying “May the merciful Lord fill us all with hope and courage to sacrificially serve Ukraine during these difficult trials!”