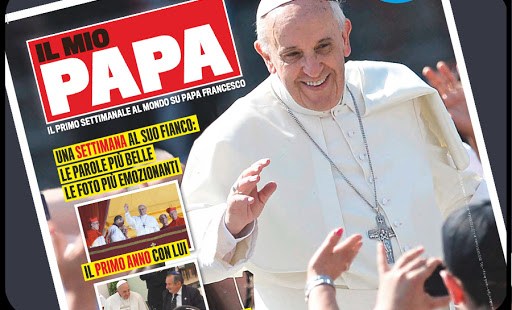 “The current Pope is a figure who, thanks to his empathy, as well as the power, the courage and the simplicity of his message, has won over everyone, both the faithful and non-believers.”

One of the largest publishing companies in Europe is releasing a first-ever weekly magazine dedicated entirely to Pope Francis due to the impact his pontificate has had in the world over the last year.

On March 3 Mondadori, Italy's largest book and magazine publisher and the third largest in the consumer magazine segment in France, announced their new magazine “Il Mio Papa,” which is to be the world's first magazine dedicated entirely to the Bishop of Rome.

Scheduled to hit newsstands every week beginning on Wednesday March 5, an initial print run of 3 million copies will be released during the first month.

“The idea for a magazine designed to report on and share the words and actions of Pope Francis came from observing how his election has stimulated a renewed interest on ethical, religious and moral issues,” the magazine's editor, Aldo Vitali, said in a March 3 press release announcing the publication.

“In fact, the current Pope is a figure who, thanks to his empathy, as well as the power, the courage and the simplicity of his message, has won over everyone, both the faithful and non-believers,” he observed.

According to the press release, the new magazine will have a positive and popular approach with a layout that is colorful, easy to read, and will engage readers with moving photographic images, and will cover the weekly events of the Roman Pontiff, including his meetings, pronouncements, engagements and audiences, such as his weekly Angelus and General Audience addresses.

Giving particular attention to the message of change that has characterized the pontificate of Pope Francis, the weekly publication will also include articles on the people and facts which inspire both the Pope's work and his words, as well as smaller items of curiosity and images that show the great simplicity of the pontiff in ordinary daily activities.

The magazine is designed to be a meeting place where readers are able to send in letters, poems, and other works for publication, and every week a section will be dedicated to the not-profit charity ONLUS in order to draw attention to their mission and to attract support.

Included in the magazine as a gift will be a double poster of Pope Francis along with the most impactful phrase of the week, and every issue will include a piece of illustrated history on the life of the pontiff, done by artist Tiziana Lupi and which are designed as pull-out inserts to be collected.

A final feature of the new publication will be a column dedicated to the Saints of the week, a list of different TV programs on the faith, and cartoons from around the world dedicated to the pontiff.

For the first edition, Mondadori will include a special feature on the one-year anniversary of the Pope's election, which will also be covered in a DVD as a supplement to the magazine the following week.

“Il Mio Papa” will come out with a launch price of 50 euro cents, and shortly after will be available on Facebook, Twitter, and the magazine's website,www.miopapa.it.