One priest's life in the peripheries, saving hundreds of women from the clutches of darkness.

Pope Francis posed a question at World Youth Day in Rio: “Where do you find Jesus?” To which he answered: “You find Jesus in the streets!” In his apostolic exhortation, The Joy of the Gospel, Pope Francis also made a strong call to all of us to go out into “the peripheries.”

So we decided to do just that. Each week Aleteia is taking to the peripheries of Rome, searching high and low, in every nook and cranny, among people from all walks of life, for the man Himself, Jesus Christ.

On our very first trip into the trenches, what we found was nothing short of extraordinary.

It’s evening. We’re in the ancient Square of the Saint Apostles; the first scent of spring hangs in the cool night air.

Thousands of people are beginning to fill the little cobbled piazza, now glinting with a sea of candles, each one lit, with a prayer, a hope…

A timid young woman stands high up before the rising crowds. She has her back turned to conceal her identity. In a quiet and gentle voice she begins to speak into the microphone.

But the story doesn’t begin here. It actually begins back in 1925 with the birth of a very special priest, Fr. Oreste Benzi, who would go on to save the lives of hundreds of women enslaved to prostitution, as well as other marginalized and poor people all over the world.

Don Benzi was born the seventh of nine children, to poor, working-class parents. He was ordained in July 1949. In 1969 he was appointed a parish priest in the outskirts of Rimini, where he began his fearless mission to the poor and the marginalized.

Armed with the conquering love of Christ, he went deep into the heart of the "peripheries" and lived with his brothers and sisters as a constant light in the darkness. 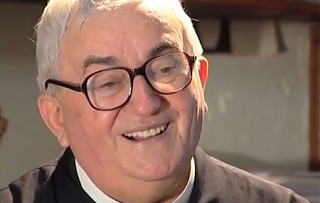 In 1972 Don Benzi founded the Pope John XXIII Community, and a year later the community opened its first family home. The Community received the official decree from the Pontifical Council for the Laity in 1968, which recognized it as an International Lay Association of Pontifical Right.

Today, the community works with poor and marginalized people all over the world.

Don Benzi, after a life dedicated to his beloved brothers and sisters of the peripheries, went to his Heavenly Father in November 2007. But his work continues to flourish through the Pope John XXIII Community, and his memory certainly lives on, as you're about to see.

We’re back in the Square…

“I was a prostitute” says the young 25 year-old woman. “The men who stopped were often married and had children of my age. They used me like an object.”

She recalled that she had never known what tenderness was because she had never experienced it. “No one stopped to think about me and say: ‘But this is a young girl.’ Nobody cared about me.”

“After many years, at a moment when I truly wanted to die – I didn’t want to live anymore – a car stops with two people, Fr. Oreste Benzi and Fr. Aldo Buonaiuto, and instead of asking me how much I cost, they asked me, ‘but you, how much do you suffer?'

“Don Oreste was a father to me, he gave me the opportunity to have a life, to study, to have friends, and to have a companion who stays at my side with me and loves me with all of her heart [a woman from the community who follows and supports her in her new life off the streets]. The first thing she said to me was: ‘I’m not interested in your past, I’m interested in our future.’ It’s beautiful to be able to live and not feel like an object – to be loved for who you are.”

The young lady finishes her moving testimony, and the Via Crucis begins.

Organised by the Community of Pope John XXIII itself, people from all over Rome and Italy have gathered together, adorned with vigil candles, to pray for all of the “crucified women” as they call them.

The general director of the Community explains: “We’re here to march and walk with these women who are enslaved, crucified truly in their bodies and minds; to share with them an experience of resurrection. We want to fight against the rackets [the illegal prostitution rings]; we want to say to their clients that they must stop enslaving these women; we want to appeal to governments to determine the laws in favour of these women, that is, against the trade.”

Present at the Way of the Cross are many of the women who used to be enslaved into prostitution, and who had been set free through their encounters with Don Benzi and the Community.

From one station to another the cross is carried by women from different groups and associations, including Italy’s Olympic athletes, medics, journalists, politicians, and the Roman police. 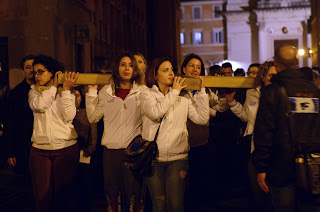 The police representatives are from a group of women in the force who have formed their own body and go out almost every night to the peripheries of Rome to speak and work with the prostitutes in order to try and get them off the streets.

The vice-president of the police force, Alessandro Marangoni, also joins the prayer. After wholeheartedly denouncing the racket of prostitution and calling for the need of society to confront the problem, he addresses himself directly to the women, saying “Don’t think that prostitution is a tunnel which you can’t get out of. There is a possibility of life. Life can be redeemed.”

The Way of the Cross continues as the glinting procession, ever growing, fills the streets of central Rome. At each moment of Christ’s passion, the suffering that these women bear is offered up to the precious blood of the Lord and His Cross. 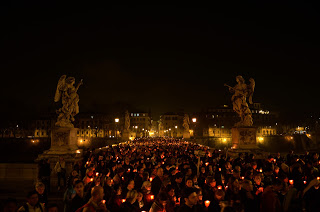 At a certain point, the young lady who made the testimony stands next to us in the crowd. When we realized it was her, we embraced her, saying “You were so brave to get yourself out of a life of prostitution!”

With a beaming face she replies: “It was the Lord who was great! It was Him who saved me.” Her young face was shining with that grace that comes only from the love of God, and the light in her eyes bore no traces of old wounds.

The last station of the cross brings us onto the Via della Conciliazione before St Peter’s Basilica and the Carmelite church of Traspontina. The last group to carry the cross – and the only group of men to bear it that evening – are the seminarians, the ones who will hopefully follow in the footsteps of Don Benzi and give their lives to his flock.

“No woman is born a prostitute, there is always someone who makes her so.” – Fr. Oreste Benzi