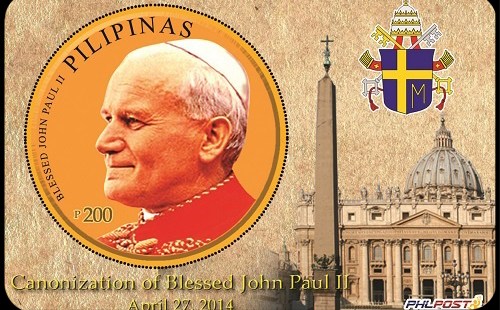 “You see, Pope John Paul is also very popular in the Philippines” she said, noting that “he came to visit us twice.”

Recalling her experience attending World Youth Day as a child, De la Cruz explained that “You feel you want to cry when you see the Holy Father. Its tears of joy, really. So now we are coming out with those two stamps” for the canonizations this week.

Speaking of the significance of the Pope to the Philippines, De la Cruz expressed that “it’s the only Catholic country in Asia,” therefore “the Pope is always so important for us.”

“In fact there’s a very big delegation of Filipinos coming for the canonization” she observed, “So you can see there’s a very strong relationship between the Filipinos people and the Vatican.”

Recounting her experience of meeting Pope Francis earlier that morning during the presentation of their new stamp of him, which features a smiling image of the pontiff along with the words “Pope Francis year II – 2014,” De la Cruz explained that “We are really so blessed.”

“Really so blessed that we were able to kiss his hand and that we were at such close distance with him and relay to him that our country is waiting for his visit.”

Meeting the Pope, she said, was like being there as “any regular Catholic wanting to have a look to see the Pope, and it’s still the same experience I have now. You feel like you want to cry.”

“There is something about the Pope that touches you. And seeing him really go out of his way talking to the old, the sick one by one, the extra effort he gives reaching out to the people is so moving,” the postmaster expressed.

De la Cruz stated that she was particularly struck by Pope Francis’ response to her declaration that “The Philippines love you Holy Father,” noting that he “only had one answer: ‘please pray for me.’ Beautiful.”

Going on, the postmaster revealed that many in the Philippines are “looking forward to the possibility that the Pope can visit them,” especially following his prayers and solidarity in wake of the typhoon that ravaged the country in November.

“Our country has gone through a lot over the past months. In fact the reconstruction is not going to be easy,” she observed, adding that “I have been there myself, and you can really see the devastation.”

“But I really think the hope of having the Pope there would give them so much inspiration as they try to move on with their lives. Because so many people have died. So many families have suffered. Up to now, people are still missing.”

“It’s a very difficult time,” De la Cruz emphasized, “but as I said we will move on, and the visit of the Holy Father will be something very, very special for them, I’m sure.”