Addressing President Abbas directly he said, “you are known as a man of peace and a peacemaker.” He referred to the good relations developed between the Holy See and Palestine, and thanked the president for the efforts being made towards an agreement regarding the life and religious freedom of the Catholic community in the State of Palestine.

“Respect for this fundamental human right” he added, is “one of the essential conditions for peace, fraternity and harmony. It tells the world that it is possible and necessary to build harmony and understanding between different cultures and religions. It also testifies to the fact that, since the important things we share are so many, it is possible to find a means of serene, ordered and peaceful coexistence, accepting our differences and rejoicing that, as children of the one God, we are all brothers and sisters.”

AP contributed to this report. 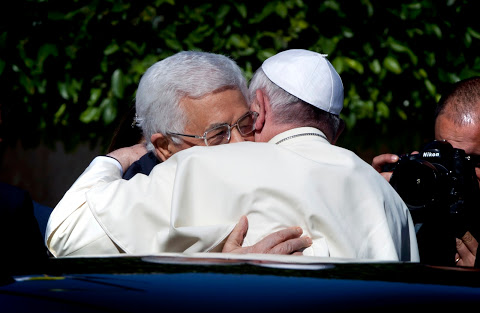 Prayer for this evening
Top 10
1
Domitille Farret d'Astiès
Attacked with acid as a baby, Anmol Rodriguez overcomes and inspi...
2
Esteban Pittaro
Argentine “Mother Teresa” was a former model and actress who embr...
3
Philip Kosloski
Your body is not a “shell” for your spirit
4
Philip Kosloski
How Our Lady of La Salette can give us hope in darkness
5
Cerith Gardiner
12 Habits of Blessed Pier Giorgio Frassati that every young adult...
6
J-P Mauro
The largest Catholic parish church in the US will soon be in Cali...
7
Zelda Caldwell
A pilgrimage to Paris’ Chapel of Our Lady of the Miraculous Medal
See More
Newsletter
Get Aleteia delivered to your inbox. Subscribe here.