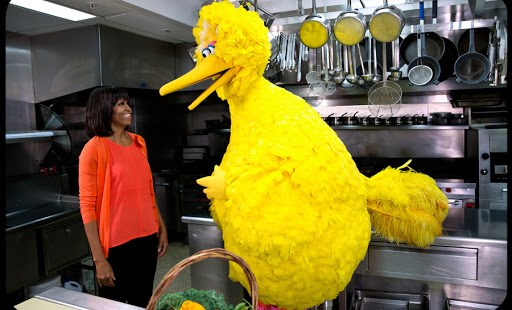 The First Lady and her “eye candy” husband will make a fine new Adam and Eve.

Michelle Obama recently urged a group of high school students to remember their important role at home: to monitor and correct their racist and misogynistic parents and grandparents. “[O]ur laws may no longer separate us based on our skin color,” Obama warned, but “there’s no court case against believing in stereotypes or thinking that certain kinds of hateful jokes or comments are funny.”

Some might correct me, but Michelle Obama’s Christianity is sincere and well intentioned. In fact, she cares about her fellow citizens so devoutly that she will not rest until we are not only safe and well fed, but good. I was impressed with her speech to a gathering of Christians in 2012: “[T]o anyone who says that church is no place to talk about [politics],” she said, “you tell them there is no place better. Because ultimately, these are not just political issues — they are moral issues. They’re issues that have to do with human dignity and human potential, and the future we want for our kids and our grandkids.” Obama truly wants to see our kids and grandkids raised in a better world, and her politics is motivated by sincere, well-intentioned, and above all compassionate religiosity.

So what’s the difference between Michelle’s religion and ours?

Today, perhaps more than at any other point in history, what should distinguish Christianity from secularism is Christian tolerance, and what we should most loudly decry in secularism is its cruelty. In a truly Christian culture, “the poor” will “always be with you,” and many wicked people will remain, as the hymn has it, “never molested, though in the wrong.” Christian tolerance is characterized by two things. First, a profound reverence for the dignity of the human person, “made in the image of God,” and endowed with an inalienable freedom of will. Second, an awareness that man is fallen, and that human affairs will never be completely purged of imperfections.

It is because of this tolerance that Christians have been obliged to reject every modern movement — from the French Revolution to Nazism, Communism, and even today’s HHS mandate — that either failed to respect individual human dignity, or to accept collective human imperfectability. By definition, movements of both anarchy and utopic collectivism can’t be tolerated, not because we cruelly withhold our tolerance from them, but because we refuse to join the movements’ intolerance of humanity.

While I do believe Michelle’s religion is sincere and compassionate, I also happen to believe, with St. John Paul II, that her brand of compassion is a “false mercy, which is not concerned with the truth and therefore cannot serve charity” in any real sense. I take that quotation from the late pope’s encyclical, Evangelium Vitae, in which he condemns much of what Michelle promotes, including euthanasia and abortion. John Paul II insisted that our motives must be obedient to an uncreated and eternal truth, but Michelle is engaged in a grand effort to create the truth.

Michelle is not concerned with what fundamentally distinguishes true Christianity from its cultural enemies. Rather, she is concerned with the superficial (and adaptable) features that Christianity shares with secularism; the comforts of family, like-minded community, the grounding of society in a common, even universal, set of moral values — the sorts of things you hear about in A Prairie Home Companion, hosted by the radical leftist-Christian Garrison Keillor. And cultural leaders like Michelle and Garrison have been quite successful in finding Christian allies. Her speech went over very well among the Methodists, and the pro-abortion Keillor was equally applauded as the keynote speaker for the Catholic Teachers’ Association in 2010.