Pray for the Girls of Nigeria 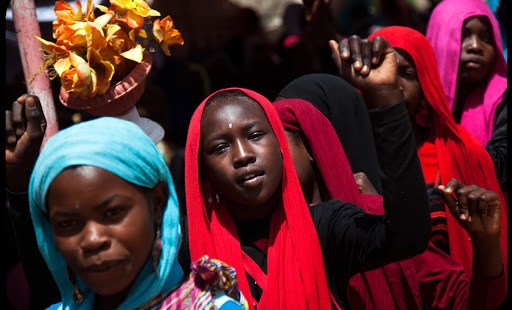 New website invites all to pray for the kidnapped girls of Nigeria.

Since the kidnapping of the young Nigerian girls by Boko Haram, prayer chains are being organized throughout the world. Over the Internet, the hashtag #BringBackOurGirls has gathered a multitude of followers in support of the girls. Ever dreamed of a tool that would combine both the power of prayer and that of the Internet? Well you got it.

Hozana.org was launched in French three months ago, and is preparing its release in English and Spanish. It is a social network which allows creating and sharing prayer chains, so as to gather praying communities around specific prayer requests. Jessica Matam, a 25-year-old French engineer, has created a prayer chain in French in support of the girls who were kidnapped in Nigeria. Hozana has set up a special page in English for the girls, to gathers thousands of people praying for them: join us!

Here is the interview of Jessica, which was originally published in French on Aleteia:

Why did you launch a prayer chain for the release of the high school girls kidnapped by Boko Haram?

Jessica Matam: Days were going by and nothing was happening for those young girls kidnapped in Nigeria. I felt powerless in the face of this situation. I had to do something. I had to pray. Then, I got the idea of asking others to pray with me. People have to take action and pray for thos girls. That’s what God wants us to do—he wants us pray for one another.

Why did you chose Hozana.org to launch your prayer chain?

Jessica Matam: When you go onto Hozana.org, you are really invited to pray. I am a Catholic and a member of the Focolari Movement. I found out about the Hozana.org prayer website through a friend who shared an article on Facebook presenting the new website that was published on Aleteia.org. I thought it was a great idea, so I went to check out the website. There I read and heard these words of Jesus, that are also the motto of our movement: “If two of you agree on earth about anything for which to pray, it shall be granted to them by my heavenly Father” and… “Where two or three are gathered together in my name, there am I in the midst of them” (Mt 18:19-20). I thought it was an awesome idea getting people to pray together online. The Internet is our future, it’s part of our life. Christians need to be present on it. In addition to that, the website is fun and very well-designed. It’s easy to navigate and to find all the different prayer intentions. I looked at all of them, and I joined a few of them. There was one that had only one person praying, so I added my name to pray with that person. I was also moved by the initiative of Nicolas Hénin’s cousin (one of the French journalists that were detained in Syria). She asked for prayers for him. She fed the prayer chain by giving us regular updates, and I felt like part of the family, as if I was praying for a relative. Then, on Easter weekend, as I was coming back from a Focolari function, I heard that he had been released. I really sensed the power of prayer. God does listen to my prayers. He heard them and I simply said, "Thank you Lord!"

What would you like to say to those who will read this article?

Jessica Matam: Join me on Hozana! In starting this prayer chain, my intention wasn’t to garner approval or simply to be "liked" on Facebook. What I want is to get people to take action and join the prayer chain for those girls. Our prayers are not in vain. God listens to us and grants what we ask—in his own way—according to his will. Sometimes the result is invisible, but that doesn’t matter! We need to pray no matter what!

On the Ground with Boko Haram: An interview with Father John Idio of Nigeria by Harold Fickett