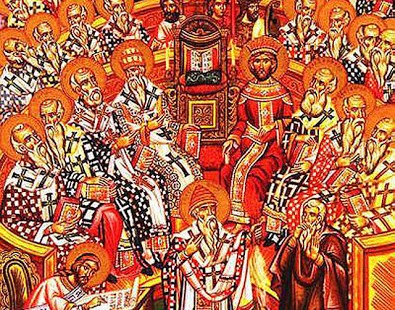 Spokesman says it’s too early to jump to conclusions.

Did Bartholomew speak too soon?

When the Ecumenical Patriarch gave an interview on his way home from the meeting with Pope Francis in Jerusalem two weeks ago, he said that he and the Bishop of Rome decided they would plan a meeting in 2025—for themselves or their successors—to mark the 1,700th anniversary of the Council of Nicea.

“We agreed to leave as a legacy to ourselves and our successors a gathering in Nicea in 2025, to celebrate together, after 17 centuries, the first truly ecumenical synod,” Bartholomew, Archbishop of Constantinople, told Asia News.

The announcement set the Catholic blogosphere abuzz. The Council of Nicea, held in what is now known as Iznik in northwestern Turkey, was where what is now known as the Nicene Creed was formulated. Might Bartholomew and Francis, who met in Jerusalem to mark the 50th anniversary of the lifting of the mutual anathemas of 1054, be planning a major ecumenical council, possibly leading to full communion between East and West?

Yesterday, when Bartholomew joined Francis for the interfaith prayer service involving the presidents of Israel and the Palestinian Authority, a Vatican spokesman responded to questions about Nicea. Basically, the message is: “Cool your heels.”

“Several news agencies, publications and individuals have reported on this gathering as a fait accompli,” said the spokesman, Father Thomas Rosica, in a statement. “No formal announcement of or convocation of this event has come from the Vatican. It is very early to jump to conclusions.”

But a commemoration would be desirable if “fears and suspicions created by historical experience” could be overcome, Vatican expert Father Thomas Reese told Religion News Service. “Not only will the meeting be significant if it brings together Orthodox and Catholics, but the study and discussions leading up to it will lead to greater understanding and reconciliation.”