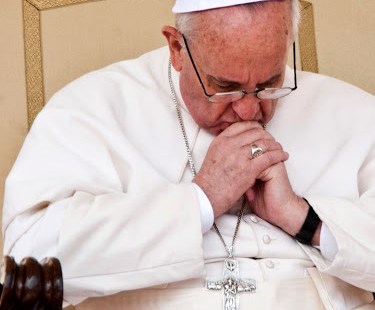 Francis begs forgiveness for “Church leaders who did not respond adequately.”

Though the Vatican declined to identify the victims of sexual abuse who were received by Pope Francis today, one of the Irish victims has spoken with The Irish Independent, calling the meeting “pretty amazing.”

Marie Kane, 43, who endured abuse by a priest in Dublin, said Francis “listened intently” as she spoke to him through an interpresed—Cardinal Sean O’Malley of Boston, the member of a Vatican commission that organized the gathering.

“There was no pomp or ceremony, and plus he is not really tall, so he is not towering over you, which is really nice,” Kane said. “He holds eye contact very well.”

She said she told Francis that the Church needed greater accountability and that she would not feel as though progress had been made until bishops who covered up the abuse had been removed.

It was Francis’s first meeting with victims of sexual abuse committed by priests, and Kane was one of six—three men and three women from Ireland, Britain and Germany—who met individually with the Pope after Mass this morning at the Domus Sanctae Marthae.

In his homily during the Mass, the Pope spoke of the "sins and grave crimes" of clerical sex abuse.

"I beg your forgiveness," the Pope told the victims who were gathered, accompanied by a family member or other companion, "for the sins of omission on the part of Church leaders who did not respond adequately" to sex abuse reports.

At a news conference at midday Monday, Jesuit Father Federico Lombardi, director of the Holy See Press Office, dismissed the idea that the meeting was about public relations and described the meetings between the victims and the pope as “very intense.”

“This is an important step on a path of healing and reconciliation,” said Father Lombardi, who declined to release the names of the six victims.

The invitation to meet the Pope had been made by Cardinal O’Malley "in several countries where there exists a Church structure regarding the victims of sexual abuse,” he said.

“The invitees arrived at the Domus Sanctae Marthae by the afternoon of Sunday 6 July," the Vatican spokesman said. "While they were dining in the refectory, the Holy Father appeared to address a first brief greeting to them. The Pope first offered them a Mass, celebrated in the Sanctae Marthae chapel at 7 a.m., attended also by the companions, members of the Commission and a limited number of other collaborators. The formula of the Mass was for peace and justice."

He said that after breakfast, the Pope "received the individual visitors, with their companions, for a private personal discussion in a room in the Domus Sanctae Marthae, one after the other."

The discussions lasted from 9 a.m. to around 12:20 p.m. "The participants, after the discussions, expressed their emotion and their satisfaction at having been listened to by the Pope with such attention and willingness,” Father Lombardi said. “The Pope showed that listening helps to understand and prepare the way to reinstate trust, heal wounds, and to open up the possibility of reconciliation with God and with the Church.”

Francis has said he would show zero tolerance for anyone in the Catholic Church who abused children, including bishops, and compared sexual abuse of children by priests to a "Satanic Mass," Reuters said.

Father Lombardi also discussed a meeting on Sunday of the Pontifical Commission for the Protection of Minors. It met at the Domus Sanctae Marthae to consider expanding it ranks to include more members from the developing world.

Coordinated by Cardinal O’Malley, the Commission also discussed the "the possibility of organizing working groups on specific themes with the collaboration of specialists and other institutions,” Father Lombardi said.