The Devil and Pope Francis 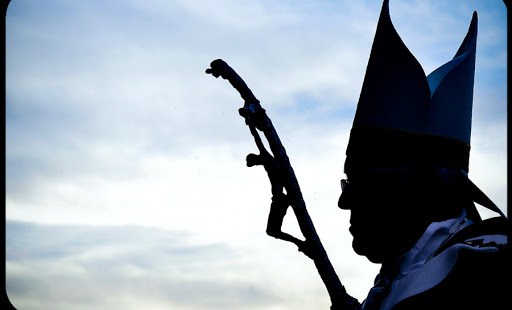 Will Francis’s legacy be his constant reference to the battle between good and evil?

Deliver Us From Evil is a new film based on the experiences of New York police officer Ralph Sarchie. When the cop investigates a series of horrific crimes, he is led into the realm of the demonic and teams up with an unconventional priest to cast out the devil.

Some reviewers rate the movie as a typical exorcist horror film, scratch, and yawn then flick the channels. They shouldn’t.

Demonic possession is not only real, but as the practice of Christianity fades and fascination with the occult increases, the need for exorcism becomes more pressing. This week the Congregation for the Clergy at the Vatican approved the statutes of a new Catholic organization, the International Association of Exorcists. Founded by the well known exorcist, Fr. Gabriel Amorth, the Association of Exorcists fosters awareness of the spiritual problem, trains exorcists and holds conferences which bring together theologians, medical practitioners, psychiatrists, and clergy.

Fr. Francesco Bamonte, an exorcist from the Diocese of Rome told L’Osservatore Romano that the Holy See’s approval of the new organization “is cause for joy." He explained, "God calls some priests to the precious ministry of exorcism and liberation, giving them the task of accompanying” those people who require specific spiritual and pastoral attention. The ministry of exorcism is an exercise of Christ’s ministry of deliverance and a sign of his victory over evil in the world.

That this organization should be approved at the top level of the Vatican show the seriousness with which the Catholic Church takes the reality of demonic forces.The ministry of exorcism is often associated with “conservatives” in the church while “progressives” prefer to dismiss demonic possession as no more than epilepsy or mental illness. The fact that Pope Francis takes the problem so seriously shows that the reality of demonic evil is not limited by labels.

In this report from the Washington Post it is pointed out that Pope Francis speaks literally and openly about the devil more regularly than any pope since Paul VI. He publicly laid hands on, and prayed for a man who it was claimed was demon possessed, he refers to the devil regularly in his homilies and speeches, dedicated a new image of St. Michael in the Vatican gardens — praying especially for Michael’s protection in the battle against Satan.

In a homily last April Pope Francis quoted his critics, “ ’But Father, how old-fashioned you are to speak about the Devil in the 21st century!’ ” The pope reminded his listeners not be fooled by the lies of Satan. “Look out because the Devil is present,” he warned.

Pope Francis is often hailed as a pope of surprises, but his open belief in a personal devil may be one of his most surprising characteristics. In modern church circles it is more fashionable to speak of “evil” than to refer to a personal devil. Pope Benedict XVI, who was regarded as an arch-conservative tended to refer to evil in these general terms, while Pope Francis is unembarrassed about referring to Satan the Father of Lies. The Post reporter quotes a Vatican insider, “Pope Francis never stops talking about the Devil; it’s constant. Had Pope Benedict done this, the media would have clobbered him.”

The Holy Spirit guides the church to the right Pope for the times. Could it be that Pope Francis’ greatest legacy will not be his inclusive attitude, his open spirit and his admirable embrace of poverty, but his constant reference to the great battle between good and evil?

Lest people imagine that the occult and demonic activity is not real, they only need to see the rise in violent, demonically themed video games, movies and heavy metal rock music. If they imagine the purveyors and believers in such things are not serious they should remember the attempted Black Mass at Harvard, the Black Mass planned for Oklahoma City and the attempt to place a monument to Satan on the grounds of the Oklahoma Capitol. While it is easy to dismiss these efforts as no more than publicity stunts, they are a reminder that Satanists are real and should be taken seriously.

Jesus Christ is the great victor over the power of Satan. It follows logically that when active faith in Christ dwindles the dark forces will sweep in. If the spiritual battle is increasingly open, then the need for exorcists and the need for a pope who is the scourge of Satan becomes more real.

If this is so, then we should expect more of this teaching from Pope Francis, and with him, Catholic priests and laity should arm themselves for battle.