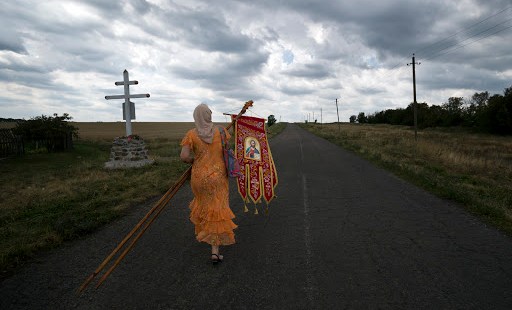 KHARKIV, Ukraine (AP) — A train bearing the dead from the downed Malaysian airliner reached Ukrainian government-held territory at long last Tuesday, but the pro-Russian separatists in control of the crash site showed little willingness to allow the full-scale investigation demanded by world leaders.

Despite anger over the rebels’ handling of the wreckage and suspicions they shot the plane down, the European Union spared Russia sweeping new sanctions Tuesday.

The EU imposed punitive measures against Russian individuals but didn’t target entire sectors of the economy, preferring to wait for a clearer picture of last week’s disaster and Moscow’s suspected role.

Five days after the plane was blown out of the sky, a refrigerated train bearing victims’ bodies — gathered up after several days in the sun — finally rolled out of the war zone and into a weedy railyard in the government-held city of Kharkiv.

It was unclear how many of the 282 corpses found so far were on the train. The crash killed all 298 people aboard the jumbo jet.

A team from Interpol along with three Dutch specialists started the identification process by labeling and numbering the remains, brought in body bags.

Then the bodies were to be flown to the Netherlands, the homeland of most of the victims, for identification using information from families.

Despite these and other indications of progress — the black boxes were handed over to Malaysia Airlines, and three airline investigators were given access to the site Tuesday — there was still no sign of a full investigation, and it was unclear when one could take place.

Rebel leader Andrei Purgin, deputy prime minister of the self-proclaimed Donetsk People’s Republic, was quoted by Russia’s Interfax news agency as saying the insurgents are willing to guarantee the security of all international experts. It was not clear if that meant the unfettered access world leaders are demanding.

The wreckage lay unguarded across a wide stretch of farmland in the rebel-held east — a source of frustration for officials around the world eager to establish the facts. Even the red-and-white tape that had sealed off the fields had been torn away.

International observers, who have been allowed visit only when accompanied by armed separatists, warned there were signs that the debris was being mishandled or even tampered with.

The fighting, meanwhile, went on in eastern Ukraine. And Russian President Vladimir Putin lashed out at Ukraine’s military for trying to dislodge the rebels.

Ukraine and Western governments say that the plane was shot down Thursday with a missile fired from a Russian-made mobile launcher in rebel hands. Russia denies supplying the Buk air defense system.

The Dutch government declared Wednesday a day of national mourning as the country prepared for the arrival of the first bodies in the afternoon.

After a 17-hour journey from the town of Torez in rebel territory, the train carrying the dead arrived at a Kharkiv factory where Ukrainian authorities have set up their crash investigation center.

The train gave a low-pitched blast from its horn as the gray corrugated refrigerator cars slowly rolled past.

Dutch Prime Minister Mark Rutte warned grieving families that the identification of some victims could take weeks or even months.

Separately, the flight data recorders will be examined by British air accident investigators.

Michael Bociurkiw, a spokesman for the Organization for Security and Cooperation in Europe, said observers will check to see whether the wreckage has been disturbed.