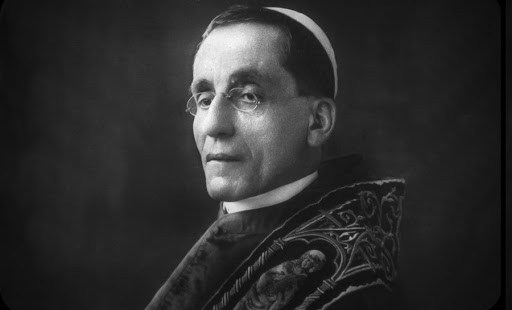 A hundred years ago, millions of European Christians greeted the arrival of war with a degree of acceptance, even rejoicing, that in hindsight seems hard to credit.

For Germans especially, this was a moment of Transfiguration, a New Pentecost. Other countries saw a fulfillment of prophecy, an apocalyptic sign. Among all the world’s churches, it is difficult to find leaders who spoke out as we would have wished a Christian statesman to have done in those appalling circumstances. With some relief, though, we can turn to one man who actually did speak as a prophet, and who moreover offered a genuinely realistic vision for peace.

Under Pope Benedict XV (1854-1922), the Vatican became a center for effective Christian peace activism. Benedict took office on September 3, 1914, a nightmare moment in European history. (The death of his predecessor, Pius X, had been accelerated by the strains and fears driven by the onset of war). German armies were advancing on Paris, and the titanic Battle of the Marne was only days away. Already the end of the year, two million soldiers would lie dead, overwhelmingly Christians killed by other Christians.

What would we expect a pope to do in these circumstances? The first thing, of course, was to lament the carnage, and plead for an end to violence, and this Benedict did repeatedly. Within a week of his accession, he condemned “the appalling spectacle of this war that has filled the heart with horror and bitterness, observing all parts of Europe, devastated by fire and steel, reddened with the blood of Christians.” War was “the bane of God’s wrath.”

In November 1914, he protested, “There is no limit to the measure of ruin and of slaughter; day by day the earth is drenched with newly-shed blood, and is covered with the bodies of the wounded and of the slain. Who would imagine, as we see them thus filled with hatred of one another, that they are all of one common stock, all of the same nature, all members of the same human society? Who would recognize brothers, whose Father is in Heaven?”

In 1916, he famously lamented “the suicide of civilized Europe.”

Benedict also offered strictly practical plans for limiting the conflict. In 1914, he urged at least a temporary Christmas ceasefire so the cannon should not be booming on the night that angels sang. But his greatest contribution came in August 1917, at a time when all the combatant powers were facing exhaustion and demoralization — a time of hunger, and deep unrest across the continent. At that catastrophic moment, he offered a peace proposal that, when we consider how events actually played out, sounds like a near-utopian alternative.

Claiming to speak from a position of total impartiality, Benedict called for a peace without victors or losers. Rival states would cease fighting and restore all the territories they had conquered, leaving disputed claims to arbitration. Most basically, though,

the fundamental point should be that for the material force of arms should be substituted the moral force of law; hence a just agreement by all for the simultaneous and reciprocal reduction of armaments, according to rules and guarantees to be established to the degree necessary and sufficient for the maintenance of public order in each State; then, instead of armies, the institution of arbitration, with its lofty peacemaking function, according to the standards to be agreed upon and with sanctions to be decided against the State which might refuse to submit international questions to arbitration or to accept its decisions.


Once disarmed, European nations would use the money saved for social reconstruction.