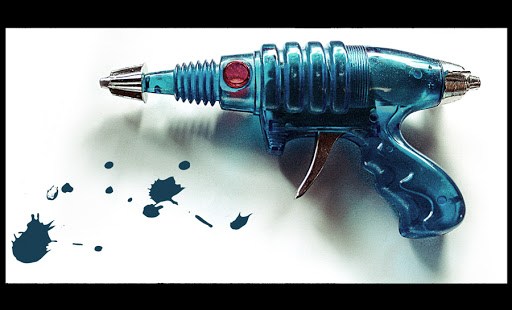 You know the public school system is in trouble when a kindergartener is suspended for talking about her Hello Kitty bubble blower gun.

Does any one remember what it was like to fly in olden times … before 9/11? In the good old days before TSA screeners patted you down in places only your spouse is allowed to touch?

Before your hands would be routinely checked for bomb residue prior to boarding about a third of the time (even though your profile is pleasant-enough, middle-aged, American-born woman of Irish-German ancestry)?

Before they could confiscate a new and ridiculously expensive bottle of Chanel No. 5 from out of your suitcase when the rental car shuttle got you back to the terminal too late to check the bag? Yeah, I’m still bitter about that.

Well, the TSA has nothing on what school authorities have been doing since the massacre at Columbine High. All over the country, they seem to have adopted a Zero Tolerance policy that results in suspensions and expulsions of kids between the ages of 5 and 17 for having guns, “lookalike guns,” and things that are classified as “other weapons” by officialdom. Maybe that should be spelled “officialdumb.”

No, I’m not defending the presence of actual guns or actual or potential weapons on school premises—at least not in the hands of kids.

But when a 7-year-old boy from Brooklyn Park, MD nibbles his Pop-Tart during “school breakfast time” into the shape of a handgun—and innocently shows it off, saying “Look, I made a gun!”—it’s a safe bet that (1) no one could mistake the pastry for an actual gun or even a gun lookalike, and (2) no one was at risk of death or bodily injury from the Pop-Tart.

A two-day suspension was only the beginning of this fiasco, however. That afternoon, the school sent a letter home to all parents reminding them of the Code of Student Conduct with its manifold crimes and punishments spelled out, and offered counseling to children who may have been “troubled” by “today’s incident.” Parents were told to “help [their children] share their feelings,” but if the parents felt inadequate to the task of quelling their child’s terrors over the Pop-Tart gun incident, “Our school counselor is available to meet with any students who have the need to do so next week.”

Although the letter intimates that little Josh was suspended for disrupting “the class” (breakfast class?!?) when he “used food to make inappropriate gestures,” a two-day suspension means that he committed a “Level 3” violation, implying the use of an “other weapon” of sorts. According to the Code, “other weapons” are defined as follows:

“Any gun of any kind, loaded or unloaded, operable or inoperable, including any object other than a firearm which is a look-alike of a gun. This shall include, but is not limited to, pellet gun, paintball gun, stun gun, taser, BB gun, flare gun, nail gun, and air soft gun.”

So, clearly, Pop-Tart guns and croissant guns and Danish guns or others fashioned from pastries fall outside the prohibited items. Case closed.

No. Not closed. Josh’s parents sued to have his penal record expunged, only to have the charges broadened, as his teacher now vilified him as a trouble-maker.

And it didn’t end there. Last month in a 30-page opinion, Hearing Examiner Andrew W. Nussbaum recommended that the County School Board uphold the suspension and refuse to expunge Josh’s school record. So we’ll have to wait for the Board’s decision, but it’s not looking good for Josh.

A wacky isolated case, you think? I’ve randomly selected a batch of Zero Tolerance school suspensions that run the entire gamut from simply ludicrous to you-have-to-be-making-this-up.

We’ll start with the easiest cases. Possessing things that look like guns or weapons only if you are, say, two years old and have never seen an actual gun or weapon.