Pope Prays for Peace in Ukraine and Lesotho 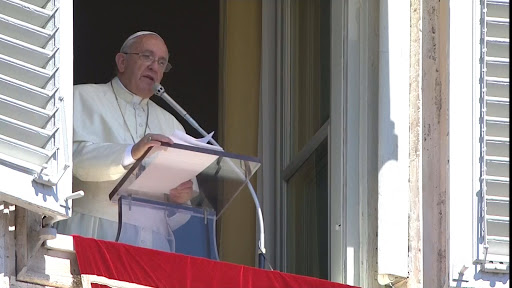 Expresses hope that ceasefire can promote efforts to achieve a lasting peace in the east.

Addressing hundreds of crowds gathered in St. Peter’ square for the Angelus Sunday September 7, Pope Francis has made two passionate pleas for peace in Lesotho and Ukraine.

Referring to Lesotho, Pope Francis said, “I join my voice to that of the Bishops of Lesotho, who have appealed for peace in that country. I condemn all acts of violence and ask that the Lord will restore to the Kingdom of Lesotho peace that is (rooted) in justice and fraternity.”

On Thursday, the Lesotho Times reported that the Lesotho Catholic Bishops’ Conference (LCBC) had called for peaceful dialogue between the country’s feuding parties and also urged the international community to ensure that stability returns to the troubled kingdom.

Addressing a media conference in the capital, Maseru, Lesotho’s Bishop Augustinus Tumaole Bane, the Bishop of Leribe, spoke on behalf of his brother bishops and urged political parties in government as well as the security agencies to resolve their differences without resorting to violence, emphasizing the need to exercise “restraint” in their actions.

Lesotho is a small Southern African mountain kingdom of just 2 million people. It is completely surrounded by South Africa. It gained independence from Britain in 1966.

The recent troubles in Lesotho started on August 30, when the country’s prime minister, Thomas Thabane, escaped across the border into South Africa saying he feared for his life. In the early hours of that Saturday, the Lesotho military seized control of the kingdom’s central police station and jammed radio stations and phones. Some shots were fired, and one person was killed in the clashes. AFP reported then that the military denied trying to stage a coup. They insisted that they raided police offices to get weapons they believed would have been given to “political fanatics.”

Before all the dramatic events of the last two weeks, Lesotho was already in a tense atmosphere which culminated in Thabane asking the army chief, Lieutenant General Tlali Kamoli, to step down and relinquish command.  According to Agence-France Presse, within hours of that order, the military attacked police stations, and Lieutenant General Maaparankoe Mahao, Kamoli’s successor appointed by the prime minister, was the target of an attempted assassination.  He too fled Lesotho.

Pope Francis’ appeal coincides with new information coming out of Lesotho that the renegade Tlali Kamoli, who has refused to step down as the commander of Lesotho’s military, has taken control of Lesotho’s state armories and may be preparing for a stand-off, a violent confrontation or even civil war.

Lesotho’s military is said to be loyal to Deputy Prime Minister Mothetjoa Metsing, who leads the Lesotho Congress for Democracy Party, a partner in Lesotho’s coalition government. The police are instead widely regarded as close to the embattled prime minister, Thabane.

When things came to a head, national police commissioner Khothatso T’soana is said to have been investigating corruption charges involving the deputy prime minister, Metsing. The latter believes the investigation is a political witch-hunt by the country’s police. As a result, Metsing is said to have declared that he could not be arrested because he was protected by the military.