Philippines Debating Law to Give More Autonomy to Islamic South 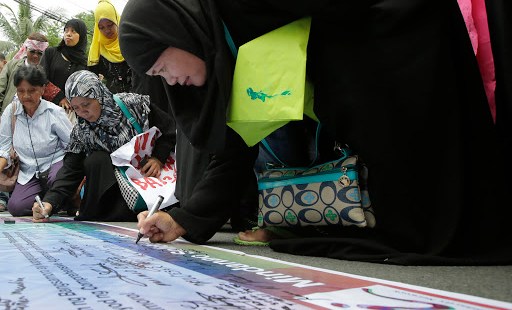 Supporters and critics of a proposed law devolving certain powers of the national government to a Muslim political entity in the southern Philippines wonder whether the law and proposed government system can protect the region from an onslaught of violent religious fundamentalist movements.

Persistent division among various indigenous Muslim (Moro) armed groups and recent allegations of contact with and recruitment of Filipinos by the Islamic State terrorist organization have prompted questions about regional, even national, secruity.

Cardinal Orlando Quevedo, Archbishop of Cotabato in Mindanao, the main southern island, in a lecture at the Jesuit Loyola School of Theology last Wednesday acknowledged "the problem of radical violent fundamentalists coming into Mindanao…is a big concern for me."

The cardinal, who has consistently advocated for correcting "historical injustice" committed against the Moro people by Spanish conquests and migration was lecturing on "Church and the Search for Peace."

Jesuit-owned Ateneo de Manila had just honored him the day before with its "Bukas Palad" (open hands) Award "for his great contribution towards the attainment of peace between the Muslims and Christians in Maguindanao through education and promotion of dialogue and social encounters."

"Iqbal told me, ‘We are not like ISIL," the cardinal said, using an acronym for the Islamic State. The proposed Muslim autonomous region “will not take over churches, they will not prevent churches from being built, they will not close churches like the ISIL is doing now in Syria” and they will “not treat minorities the same way that others oppress minorities,” he said, quoting Iqbal’s remarks to him.

Still, the cardinal, in responding to questions, said he believes growth of violent fundamentalists "is a problem" because this involves foreigners.

The draft law provides for the creation of Bangsamoro, comprising descendants of people who were living in Mindanao and Palawan Island, southwest of Manila, before the Spanish occupied Moro territories beginning in the 1500s.

According to the draft law, descendants who are no longer Muslims have the right to become Bangsamoro members by registering themselves and family members to be part of the region.

Cardinal Quevedo said that despite questions, he remains "optimistic" about the BBL as a means to achieve peace and development and to allow Moro people to exercise their right to self determination. “I’m very optimistic now…but with a certain guardedness,” the cardinal replied to a question from the audience.

According to the law, the political region will have a democratic parliamentary system, and will not be an Islamic state. Elections will be of political parties, and non-Muslims can join any of the political parties. There are reserved seats in the legislature for Catholics, Buddhists, Christians and other representatives of minority groups.