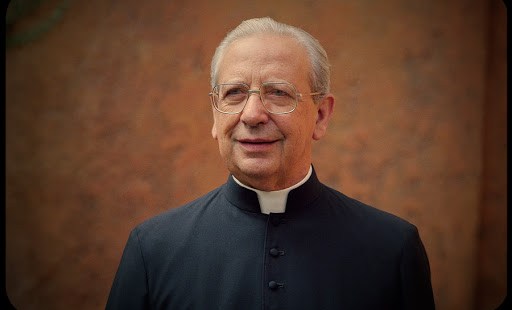 Priests recall a man “in love with the Church”

Just over 20 years after his death, Bishop Álvaro del Portillo will be beatified this Saturday, September 27, in Madrid, his birthplace—the next to last step before canonization.
Successor to St. Josemaría Escrivá de Balaguer, founder of Opus Dei (“Work of God”), Bishop Portillo faithfully followed in the founder’s footsteps, retaining the spirit of “The Work,” as it is called. When he died on March 23, 1994, Pope John Paul II attended his wake, the only one he ever attended as pope. “I had to come,” he said. He had been a good friend to the pope and had played an integral role at the Vatican. In the midst of it all, Don Álvaro (as he was known) lived the virtues to the same heroic degree as the founder, which is rare in the annals of church history, showing that the path St. Josemaría Escrivá set out so painstakingly is an efficacious means of finding sanctity by doing one’s ordinary work well for love of God.

To capture the essence of Álvaro del Portillo as a person, I recently spoke with four priests of the prelature of Opus Dei, including the Rev. Gregory Coyne, the Rev. C. John McCloskey, and the Rev. John Debicki, who have served at the Catholic Information Center in Washington, DC, and the US Vicar for the Prelature of Opus Dei, Msgr. Thomas Bohlin.

“The one impression,” Debicki had of Don Álvaro was of his “extraordinary serenity.” It went deeper than his calm nature and Mexican mother. “He was a saint, I think,” said Debicki, one who “grasped perhaps more clearly than any of the rest of us what it means to be a child of God.” Portillo had lived through some harrowing times during the Spanish Civil War, 1936-1939, he added.

McCloskey also noted Don Álvaro's "serenity” and the contrast with St. Josemaría Escrivá, who was “a live wire… Don Álvaro was an engineer,” focused on getting things done in Escrivá's shadow.

Bohlin said he was “very fatherly in noticing people” and “looking out for their needs.” He recalled an occasion when Don Álvaro was visiting Chicago, and he noticed one fellow who was particularly quiet. Learning the man did not speak Spanish, and was also an engineer,  he went up to him and said, "We’re both engineers, we’re colleagues. I hear you’re into bridges and things,” said Bohlin. “And so [Álvaro] just started making conversation,” which delighted the reticent engineer.

Coyne remembered him as "kind, gentle, and intelligent" with “a huge heart.” He recalled how “he would always pray for you on your birthday in a special way.” "If you were studying in Rome at the seminary of Opus Dei," said Coyne, who was there from 1984-1989, “he would seek you out on your birthday and he wouldn’t rest until he found you.” One year, Coyne spent his birthday at the Pontifical University of the Holy Cross (Santa Croce). “When I got back,” he said, “I saw [Don Álvaro] there in the hallway and he had his arms open and he gave me a big embrace and said, ‘Where have you been? I’ve been looking for you all day long to greet you.’”

McCloskey, who arrived in Rome on October 2, 1978, the day of Pope John Paul I’s wake and the 50th anniversary of Opus Dei—when the whole question of whether Opus Dei would become a prelature hung in the balance—experienced Portillo's  "fatherliness" when the bishop was “going out the door with Don Javier (Bishop Echeverría, the current prelate), his vicar.” "It was a custom for people who were studying for the priesthood to talk to the prelate to let him know 'I’d be willing to be ordained if you think I have the qualities,'” McCloskey said. “I was in my work clothes,” he continued, “doing some menial work around Villa Tevere (the central house of Opus Dei in Italy) and he stopped me and I said, ‘Can I talk to you for a moment, Father?’ He said, ‘Of course.’ And, he turned around and told Javier to go and get the car. He took me for a little walk inside Villa Tevere, and listening to me, put his arm in my arm, and then he was saying what it means to be a priest… and 'I hear you, I’m very glad you’re doing this.' Here’s this man, who’s a very important man, who’s in a hurry to go to the Vatican and he took the time to spend with this little old nobody and then he gave me a hug and just went right out the door.”

Three years later, the day McCloskey was ordained at Torreciudad, a beautiful Marian shrine St. Josemaría Escrivá had shepherded to completion, he drove down to Madrid afterwards with his parents and an aunt and uncle, now all deceased, and visited the headquarters of Opus Dei in Spain, called Diego De Leon. And, of all things, Álvaro del Portillo was there and said to him, “I want you to give me your blessing.” After the bishop knelt down, McCloskey gave the prelate the blessing.

The man kneeling in front of him was not only the “head of Opus Dei,” who brought the group to 20 countries during his tenure, in addition to having worked for 40 years with Escrivá during the foundational era, but he founded Santa Croce at the behest of St. John Paul II. Don Álvaro was also  “involved in the Curia in all types of things, much more than we know, that will only come out with time,” said McCloskey. “He was in love with the Church.”

This Saturday, we will learn the full measure of his love, as Álvaro del Portillo is elevated for all in the Church to look to as an example of holiness, and of supernatural and human warmth.

Mary Claire Kendall is a Washington-based writer. Her book, "Oasis: Conversion Stories of Hollywood Legends," is being published in April 2015.