Football and the Need to be Epic 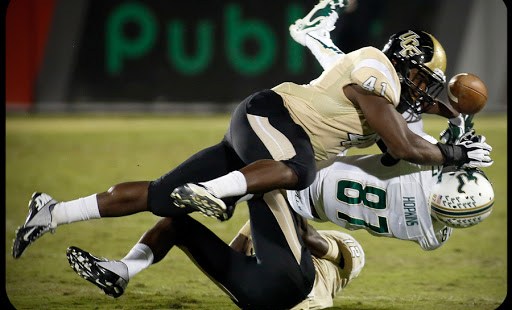 The game showcases all that is best, worst and weirdest about America today

It is fall in America, and that means it is time for ground-shaking showdowns between helmeted men wearing bright-colored costumes surrounded by tiers of screaming fans.

Don’t get me wrong. I love football. I hate the bad rap it has gotten. Saturday Night Live featured a skit in which players announced themselves for the television by name and crime instead of name and college — but statistics say NFL players’ arrest records are half that of society at large. It stands to reason. To succeed in the NFL takes extraordinary self-discipline and hard work.

I also recently rediscovered the joy of watching football on Sunday afternoons, something I hadn’t done for most of my married life. But that didn’t prepare me for what I found when I went to Arrowhead Stadium to watch the historic Chiefs vs. Patriots Monday Night Football game.

In the flesh, football culture seemed to say a lot about American culture.

Everything about the game was exaggerated in importance. We sang the National Anthem while a football-field sized flag was unfurled down below. At the words “the rockets red glare,” red rockets glared. When we sang “the bombs bursting in air,” fireworks crackled above us.

As the starters’ names were called, huge balls of flame shot up from two columns that the players ran in between. We could feel the wave of heat across our faces where we sat in the upper deck.

The game seemed to showcase all the best, worst and weirdest about America today.

The Best: Fans showed unabashed unity and love for each other, high-fiving anyone with a raised hand, and talking like old friends about the action unfolding below them. This crowd sang the Star Spangled Banner, cheered the U.S. Marine Silent Drill Platoon, and roared their appreciation for the firefighters honored at the game.

The Worst: Many in the crowd raised middle fingers high as Patriots quarterback Tom Brady took the field (while others delivered the same message verbally). Shouts of “Break Brady’s knee!” filled the air, recalling without shame the time the Chiefs did just that. On the way in, a fan stood outside the gates finishing a six-pack of Sam Adams, smile wide and eyes at half-mast with a Patriots helmet at his feet. On the way out, we passed a stumbling, handcuffed Chiefs fan hurling invective at two cops. They were drunken bookends on a game filled with drunkenness.

The Weird: In messages to the fans, the Jumbotron kept referring to the stadium as “The Chiefs Kingdom”: We were to “respect the kingdom” and “protect the kingdom.” Each Chiefs touchdown (and there were four of them) was punctuated by more rockets’ red glare and bombs bursting in air — as well as runners hauling Chiefs flags around the football field, and a cheerleader galloping across the middle of the field on horseback.

As the over-the-topness of it all ratcheted up around me, a thought rose to my mind which I couldn’t shake: Football is the national pastime of a culture of narcissism.

Ours is a culture where every action hero has to save the world by the end of the movie and every child has to get a trophy at the end of the activity. And there is football in the middle of it, treating each touchdown like the Fourth of July. Ours is a culture where brand names are slick and exciting and spark a longing which can only be satisfied by spending. And there is football, where everything about the game is branded and brought to you by someone who wants your money.

In our culture, we want wedding photos, barbecues and Halloween costumes to be “epic” and “awesome”and if they aren’t, we know how to make them look like they were, on Facebook. Football performs the same function, putting ordinary folks like us—my son and me—up on its Jumbotron, showing the world our epic time at the game.