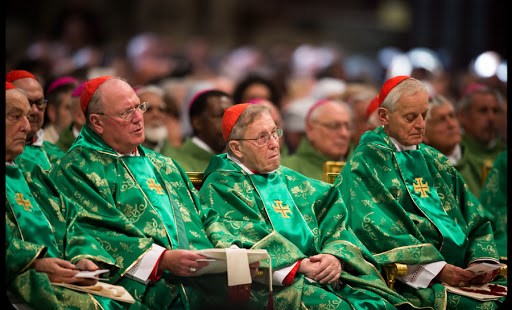 Let the world know about the fatherly compassion of our bishops

One of the failings of our modern culture is the declining presence of fathers in the home. The U.S. Census Department shows that 43% of U.S. children are living without a father. This absence makes them vulnerable: Ninety percent of runaways and homeless kids come from a fatherless home. Over 70 percent of pregnant teens lack a father. Nearly two-thirds of youth suicides occur among those from fatherless homes. Over 70 percent of high school dropouts, substance abusers and youths in juvenile detention centers were living without their father.

My home had a strong fatherly presence. Dad provided for us economically, emotionally and spiritually. Dad taught me the harder lessons in life. Perseverance was instilled on the golf course, empathy at funerals, and civility at the dinner table. Our family was a school of virtue and my father was the headmaster.

My ideal of fatherhood is one of authority seasoned with generous love. Dad insisted that his six children follow commonsense rules and respect. But he didn’t rule with a heavy hand. Correction was swift, but gentle. His intent was guidance and forward progress. Retreat to lower levels of maturity was never an option.

For the past three days, I have been surrounded by the Synod Fathers at the Extraordinary Synod on the Pastoral Challenges of the Family. These men come from every corner of the world. Every skin tone of humanity is represented in their faces. They converse in a variety of languages, but they all have one characteristic in common: they geniunely love the people of God in their dioceses and homelands.

And the testimonies of the Synod fathers reveal their affection for the family. They speak openly about the trials that families entrusted to their care experience: war, ebola, poverty, migration, secularism, and violence against women. Some tear up as they give their statements, the sorrow in their hearts becoming evident to us.

They also speak of the joys they have witnessed: families who come together to pray and share meals; families who provide economic aid to their neighbors; families who forgive deplorable sins of their kin. It appears that such happy, hopeful moments serve as an antidote to despair, an elixir for these fathers, helping them to remain faithful and energetic in their role of shepherd of the flock.

The most loving father in the room is Pope Francis. He sits calmly in front of the assembly and seems to pull the full weight of every word into his soul. He sometimes rests his chin on his hand, or takes a slow and measured breath. He is attentive to the needs the flock – his children – seated before him. He guides all that is said and rules with a gentle hand. He visibly personifies Christ.

The charity of the Synod fathers has brought back many childhood memories of my own father, who at 92, is still teaching me how to live a kind and faithful life. Each session of the assembly is another opportunity to be surrounded by fatherly affection. Let the world know that these men care deeply for their flock. They want what is best for us. And that best is the love of our Heavenly Father.

Alice Heinzen
is the Natural Family Planning Coordinator in the Office for Marriage and Family Life in the Diocese of LaCrosse, Wisconsin. She and her husband, Jeff, who directs the Office, are in Rome, attending the Extraordinary Synod on the Family as observers (auditors) at the invitation of Pope Francis.