Only Christianity Can Save the West from Falling 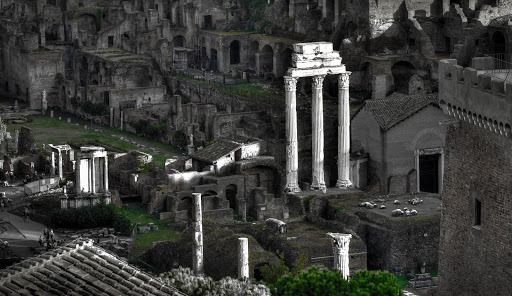 Here is what we must do

“Everything that was happening when Rome fell is happening again now,” my 12-year-old informed me. “My teacher has a whole list.”

I think my son’s Kolbe Academy teacher is on to something. There is the breakdown of civic and personal morality. There is the decadence in entertainment. There is an over-stretched, weary empire, a “monstrous amalgam of Market and State,” as Alasdair McIntyre recently put it, which is on the wane while new powers rise in the East. Meanwhile, our rates of abortion, euthanasia, street violence, war, suicide, and STDs suggest that the barbarians are already inside our gates, and have been for some time.

And, as before, we Christians are right there in the middle of it.

We are there, as before, holding hands with the elites and adding our sad betrayal to their corruption. Catholics from Washington to Hollywood — in universities, hospitals and corporate offices — are leaders in the culture of death.

But, as before, this is not the whole story of the Church in our day. Catholics in all of those places are also still the antidote to our culture’s worst tendencies.

What is a Christian’s job when the Empire is falling apart? The same as it was before. As Pope Benedict XVI put it, “When darkness seemed to be spreading over Europe after the fall of the Roman Empire, St. Benedict brought the light of dawn to shine upon this continent.”

When the Roman Empire entered the “dark ages” Catholics guarded the light of Christ in monasteries, homes, schools and churches and re-established civilization.

What would that look like today? It stands to reason that it would look Benedictine.

One of the sad consequences of contemporary life is that our culture has become atomized and anonymous. We have become a collection of individuals, circling in each others’ orbit while keeping to ourselves.

Take shopping as an example. We rifle through goods that came to our superstore from who-knows-where thanks to who-knows-who, then we complete our transaction with the cashier and keypad, and need never make eye contact with anyone. Or, just as likely, we scan and bag on our own — or skip the whole process by going online.

It’s strange: In today’s “Made in China” economy, we are never within 6,000 miles of the people who made most of the non-food items we buy in the store. We are also easily a thousand miles from those who grow our food; those who pick the food are in an immigrant class we don’t interact with; even those who deliver the food to our stores live in some other city.

But to anchor and deepen human relationships takes real interaction.

Ironically, in a day when Catholics often decide that “The New Evangelization” means “go online” we may need to rethink our approach. Maybe in an overly digitized age, the New Evangelization means that we must also go out of our way to meet real people, in real life, face to face.

“Love God above all else” cannot possibly mean “pin a Divine Mercy picture on your Pinterest page.” “Love your neighbor as yourself” has to mean more than “Like all your neighbor’s status updates that aren’t too political.”

The Benedictines established communities in their monasteries, and then taught the world how to imitate their virtues through commerce and education. As our age descends into a darkness illuminated by smart-phone screens, maybe whoever looks into their neighbor’s eyes wins.

What we need to show them, when we have their attention, is that there is hope in the world. People are fascinated by freedom and love: By people who have actually managed to live for others, and sacrifice their goals for others — people who are radically free.

We can still ensure that the Church is the home for that.

After the October death of the eccentric and brilliant theologian Msgr. Lorenzo Albacete, the New York Times and Washington Post celebrated his life. They saw him in him the beauty of the faith really lived.

Msgr. Albacete showed the way. He told Charlie Rose in 2005: “Faith and experience of life should correspond. This is what St. Benedict did. …. We need creative minorities to establish ways of life that are attractive to the people who experience the cruelty of today’s world.”

Or, if you prefer St. Francis, the Post quoted Msgr. Albacete saying: “If tomorrow it was revealed that the pope had a harem, that all the cardinals had made money on Enron stock and were involved in Internet porno, then the situation of the Church today would be similar to the situation of the Church in the late 12th century … when Francis of Assisi first kissed a leper.”Christianity can, and must, rise again in the ruins of empire. The only way we can fail is if none of us look up from the screen; if none of us kisses a leper.