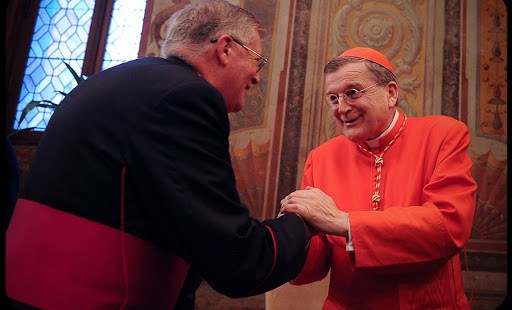 The bishops have a right and duty to advise the pope and give feedback.

In the midst of Pope Francis’ popular leadership, an increasing number of prominent bishops and archbishops are voicing concerns. Thrilled with his compassionate message and sharing his vision for the poor and marginalized, they wish he would combine charity with clarity.

Cardinal Raymond Burke observed recently that some Catholics feel that the ship of the Catholic Church is “rudderless,” while Archbishop Chaput of Philadelphia was critical of the “confusion” that seemed to be emanating from the recent synod on the family.

In a highly biased report, radical progressive Michael Sean Winters twisted the Archbishop’s comments into criticism of Pope Francis. Archbishop Chaput replied, “There are people who…deliberately want to twist the truth, and divide the Church, and use my words as saying I was critical of either the pope or the synod, and that absolutely wasn’t true.”

Cardinal Burke has joined Archbishop Chaput in expressing his loyalty and support for Pope Francis, but criticism of a pope’s style or advice on how things can be handled better is not a personal attack or disloyalty to the Pope. The idea that conservative American bishops are waging war on Pope Francis is media imagination that is “full of sound and fury—signifying nothing.”

Cardinal George expressed his support and admiration for Pope Francis, but he also confessed to some confusion about the Pope’s style of communication. Like Archbishop Chaput, Cardinal George saw that there was considerable confusion in the synod and among Catholics about where the church is going and, most of all, what the Holy Father himself believes about the contentious matters brought before the synod.

When it comes to the Pope’s confusing statements, Cardinal George spoke for many Catholics: “The question is raised, why doesn’t he himself clarify these things? Why is it necessary that apologists have to bear that burden of trying to put the best possible face on it? Does he not realize the consequences of some of his statements, or even some of his actions? Does he not realize the repercussions?”

The retiring Archbishop of Chicago is battling cancer, but he would like some face to face time with Pope Francis. “That’s one of the things I’d like to have the chance to ask him, if I ever get over there. Do you realize what has happened, just by that very phrase ‘Who am I to judge?’ How it’s been used and misused? It’s very misused, because he was talking about someone who has already asked for mercy and been given absolution whom he knows well. That’s entirely different than talking to somebody who demands acceptance rather than asking for forgiveness. It’s constantly misused.”

The Cardinal echoed Archbishop Chaput and expressed concern that the Pope’s admirable openness is misunderstood innocently by some and twisted intentionally by others. The problem is that Pope Francis’s warm and open-hearted approach may end up backfiring. “It’s created expectations around him that he can’t possibly meet,” he said. “That’s what worries me. At a certain moment, people who have painted him as a bit player in their scenarios about changes in the Church will discover that’s not who he is. He’s not going in that direction. Then he’ll perhaps get not only disillusionment, but opposition that could be harmful to the effectiveness of his magisterium.”

Allen asked Cardinal George whether the American bishops were rallying against Pope Francis to “defend the faith” and the Cardinal repudiated such an idea. The bishops have a right and duty to advise the pope and give feedback, but the idea that any one national church leadership would set themselves up as arbiters of the faith is not Catholic. “I don’t think it would be good to do it as a national thing… It wouldn’t be good to say, ‘American bishops versus the Vatican.’ We have no mandate from Jesus to be a counterweight to the Holy See!”

Nevertheless, bishops from around the world will help Pope Francis refine his style, improve his method, and combine his charity with clarity. That’s part of their role, and for them to assist the Holy Father in this way does not undermine his ministry, but strengthens it.

TheRev. Dwight Longenecker is the parish priest of Our Lady of the Rosary in Greenville, South Carolina. His latest book is The Romance of Religion: Fighting for Goodness, Truth and Beauty. Learn more about it at his website, dwightlongenecker.com.