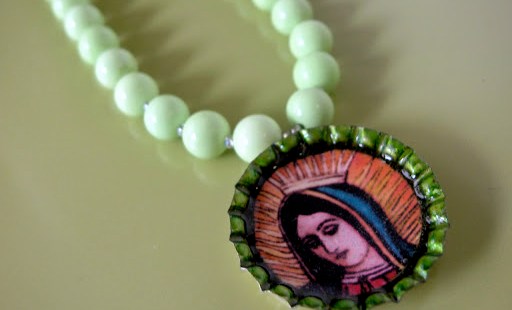 Is trust and dependency on Our Lady missing from your life?

In March of this year, a dear friend I hadn’t seen in many years invited me to Mexico City to speak at a small conference on Evangelii Gaudium. Now initially I was not eager to go. It meant a three-day trip during one of my busiest academic terms. In fact March was the only month in all of the year when I didn’t have to travel. Add to this the fact that I was recovering from a miscarriage and physically exhausted.

But—I asked my friend if there would be any chance to visit the Virgin of Guadalupe during the trip. Not only did he say yes, he offered to bring me to her personally—an offer I could hardly turn down (especially in light of my very rusty Spanish). So I agreed—telling myself it was to be a pilgrimage. All the annoyances and discomforts would not seem a burden—they would be welcome difficulties since a pilgrimage should be hard. And this is how it came to be that when we celebrated the Feast of Our Lady of Guadalupe last week, it was the first time I felt that I knew her.

Now, the occasion of this Feast seems a good time to relate some things I learned on pilgrimage. Such as, the notion that it is a very good thing to make a pilgrimage, especially on Ash Wednesday when one wants a reminder that the comforts (and discomforts) of this life are not the point of it after all. Walking for miles that day through downtown Mexico City, visiting glorious Franciscan and Dominican churches of the colonial era, I also learned that it is remarkably easy to get ashes there on Ash Wednesday—much easier, in fact, than ordering from menus with rusty Spanish.

Another thing I discovered is that most Mexicans don’t speak of Our Lady of Guadalupe by some formal name. Instead they have sweet nicknames for her, such as “La Morenita” (literally “the little brown lady”), and “La Guadalupana.” This single fact alone caused me to reflect a great deal on the seeming coldness of our North American Catholicism. If we have not one common term of endearment for the Blessed Mother, do we love her very much? I suppose it is possible to argue that “Our Lady” is one we have used—or Notre Dame—but really, if you tapped an average U.S. Catholic, would you find “Our Lady” rolling off the tongue?

And this brings me to the last point: spending just a little time in Mexico taught me just how much the faith is not instinctive for us in the U.S. Compared with the Mexican people who love our Lady, our faith is more "rational," more intellectual—less childlike. Certainly this “adult” love, if you will, has its merits when cultivated. But it also has its complexities; the aim of the spiritual life is to love simply, like a child.

So here is what I really learned: with respect to Our Lady, Catholics in the United States—and I include myself in this observation—are like children with an attachment disorder: insecurely attached to our mother. But this is not surprising. We are predominantly Protestant here in our culture and faith traditions, even as Catholics. Why should we not behave as if we were motherless? At the very core of Protestant Christianity is the rejection of a single, visible Mother: Holy Mother Church. The Reformers, unwittingly or not, spawned motherless children—children conceived outside the womb of the Church.

This is why Protestant Christians have a difficulty with Mary. It is not, really, that the doctrines surrounding Mary are so hard to swallow. They are not. If we believe that God is the Sovereign King of the Universe, there is absolutely no theological reason why this Sovereign King cannot bestow whatever honors He chooses on the excellent Lady who bore His Son—even raising her to the dignity of the Mother of God. No, the reason why our separated brethren have a problem with Mary is that they have a problem with the Church. Since Mary is the model of the Church