Wine That’s Fit For a Pope

A California Winery Taps Into Its Catholic Roots

When winery owner Tim Busch presented Pope Francis with his Cabernet FRANCis, the last thing he expected was to get a call requesting more of it. The entrepreneur from California had to sheepishly ask his friends in Rome to return the bottles that he had just given as gifts to them because there were only 11 in existence. Fortunately for Tim, the prelates were happy to oblige for the pope.

Busch and his wife, Steph, founded Trinitas Cellars in 2002 in Napa, California, and are not shy about their love for the Catholic Church. Among their many red and white wines are six unique varietals known as the Faith Collection, which includes the Cabernet FRANCis.

Made from the Cabernet Franc grape, the Cabernet FRANCis started out as a pet project of Busch’s son, Garrett, who never dreamed it would end up on the pope’s table. When Francis was elected on March 13, 2013, Tim called his son, the CEO of Trinitas, and said, “e need to make a wine for the new pope now.” Garrett, knowing what went into the whole process said, “That’s impossible.” But he quickly remembered his own barrels of Cabernet Franc that he had been tinkering with and the name Cabernet FRANCis popped into his head. The father and son were able to make a case of it for Tim’s upcoming trip to Rome, with more bottled thereafter. 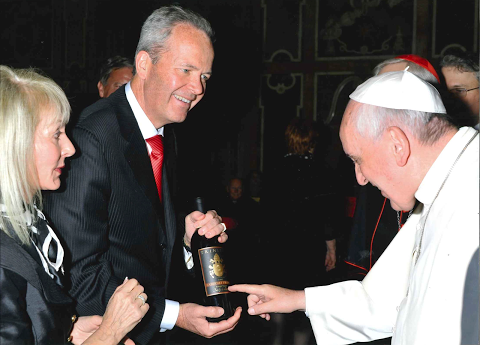 The Faith Collection also includes the RatZINger Zinfandel, which was presented to Pope Benedict XVI in 2008 as a gift when Tim Busch had an audience with the Holy Father. Although the German pope received many gifts that day collected on a cart, Busch saw him eye the wine from the elevator, walk over, and claim it for the his lunch table.

The Father Mathew Cabernet Sauvignon is comprised of grapes harvested on the property of St. Joan of Arc Parish in nearby Yountville, California. The wine is named for the long time pastor, Fr. Mathew, who has since retired to his native India to help needy children. The parish and Fr. Mathew receive 100% of the proceeds from the sale of the property’s grapes.

The three other wines rounding out the Faith collection include Revelation, a red wine made of a Portuguese varietal called Tinto Cao; Psalms, a white blend of Semillon and Sauvignon Blanc; and Rose’ary, a blend of Zinfandel, Carignane, Cabernet Sauvignon, and Merlot grapes that have gone through a slow fermentation process to create a rosé.

“We named the winery Trinitas as a nod to the Trinity, of course, but it has come to mean more than that,” says Garrett Busch, winery CEO. "Trinitas also has worked its way into our winemaking philosophy.”

“Trinitas represents the trinity of elements that go into fine winemaking: sun, soil, and humanity. Sun represents the vintage and the weather that year, something that we have no control over and is in God’s hands. The soil represents the vineyards, the soil types, and represents how we work with God in nature to produce amazing grapes.”

And finally, Garrett explains, “Humanity represents the winemaking, the cultivating of the grapes, and lastly all those people who share our passion for wine, because without them we could not do what we do.”

In addition to their Faith Collection wines, Garrett says that the family’s Catholicism is evident throughout their business—and just comes naturally. A statue of “Our Lady of the Grapes” quietly overlooks the Trinitas Estate Vineyards at the family owned Meritage Resort and Spa. The resort also features a chapel with the same name. “Our business operates with our faith in mind,” says Garrett, “which means treating vendors fairly, starting events with grace, and staying involved in family charities.”

Garrett Busch was a teenager growing up in Orange County, California, with little knowledge of the wine industry when his parents purchased the winery. After finishing a degree in business and an MBA at Notre Dame University in 2010, Garrett agreed to help out at the winery for the summer, with the intention going into consulting in the fall. When the general manager for the winery left, Garrett took over in the interim. After several months of serving at the helm, Garrett asked his parents when the “new guy” was coming. “You’re it,” was his parents’ response, and Garrett has been learning, trial by fire style, ever since.

Despite diving in to the industry with little background in viticulture and wine making, Garrett has fallen in love with his work and has brought himself up to speed on all the different aspects of the industry. “In today’s cultural climate,” he explains, “many Catholics are afraid to let their faith be seen, particularly in business. But many of our guests and customers welcome our small displays of faith.”

Trinitas is thriving under Garrett’s direction. The winery has expanded significantly, doubling the 2007 output of 15,000 cases to more than 30,000 cases annually, adding more varietals and developing special buying programs.

“It is rewarding that people recognize what we are doing. I have received long heart-felt letters thanking us for being so comfortable in our faith. Not only is what we do interesting and dynamic,” Garrett adds, “but the best part is to able to spread joy in everything that we do.” 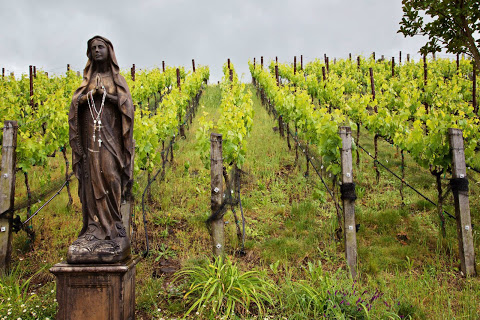