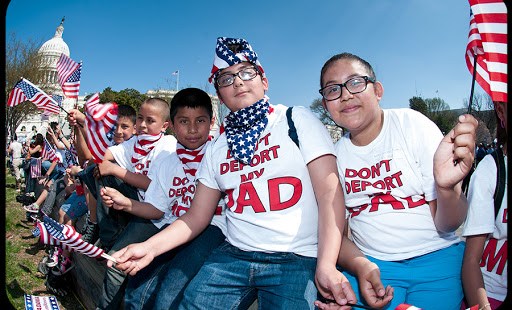 Today’s immigrant population resembles that of 100 years ago


America of course would indeed suffer terrible trials during the early twentieth century, crises of poverty and pollution, disorder and rampant crime. In retrospect, though, the racial and ethnic nightmares seem wrong-headed to the point of being incomprehensible. Most modern observers find baffling the suggestion that the ethnic newcomers were anything other than fellow-Whites.

Now, that whole story is deeply problematic. Scholars of “Whiteness” trace disapprovingly how new ethnic groups over time acquire the badges of White privilege, which mark them as automatically superior to other groups, especially African-Americans. For present purposes though, I just note how language and perceptions change over time.

Do we see here a lesson for the coming decades? Projections of a majority-minority nation depend entirely on high projections for the numbers of Latinos. But roll that film forward a couple of decades, to an age when the great majority of Latinos will maintain some kind of separate linguistic or cultural identity, but only to the extent that Polish-Americans or Italian-Americans do today. Also, be sure to factor in frequent and easy intermarriage. In that scenario, surely, the ethnic or racial line separating “Whites” and “Latinos” fades to near-invisibility. Future generations might question how anyone ever considered the matter differently.

We actually see instructive signs of such a process in recent media complaints about the lack of “minority” representation in high tech industries, symbolized by Silicon Valley. Such headlines stress that those work-forces are overwhelmingly “White and male” in their composition. Reading a few lines into the story, though, we find that this racial language applies to non-Latino Whites, but also to South and East Asians, who for media purposes appear to have segued invisibly into fully White status. That remark does not excuse the exclusion of some ethnic groups from these booming industries, but it does remind us that the “White” category is already a very expansive one.

If twentieth-century history is anything to go by, concerns or dreams about a majority-minority America are deeply flawed. Core lesson: we can’t talk about majorities or minorities until we realize what a fluid and flexible concept Whiteness has been and (presumably) will be.

In my next post, I will suggest what a critically important role religion plays in this process.

Philip Jenkins is a Distinguished Professor of History at Baylor Universityand author ofThe Great and Holy War: How World War I Became a Religious Crusade.