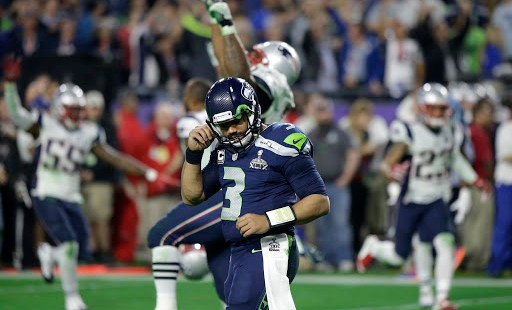 A Broncos fan, displaced in New England, ponders some lessons from Sunday’s game.

Here in snowy New England, it has been a bit of a disorientating week.  Last Monday, Jan. 26, we prepped for a blizzard that shut down area schools for three days, and a week later, yet another snow day, as the rain clouds that drifted over Arizona kept heading northeast.

Also headed this way is a fourth Vincent Lombardi Trophy along with the New England Patriots who won their recent Super Bowl in epic fashion.

I should note that I am resident alien of football fandom here in the Boston area.  Being a Denver native, I take my Broncos allegiance with me wherever I go (including studying abroad in Swansea, Wales, when the Broncos won their first Super Bowl in 1998… MVP Terrell Davis migraine fake handoff? John Elway helicopter play? You know what I’m talking about.)

But of course Sunday’s win is a boost for the local squad and community here, where the pain from a loss could have very well been buried deep in the collective New England sports’ hurt locker.  But instead, as someone from Facebookland wrote, this recent precipitation is “championship snow!!!!”

Here are my moments:

1. Most Surprising Interview:  From  Malcolm Butler who made the game saving interception for the Patriots.  Post-game, NBC’s Michele Tafaya had to literally catch up with him for questions about the play.

“I just had a vision that I was going to make a big play and it came true and I’m just blessed…I can’t explain right now, I’m just…”

No explaining necessary, this sounds kinda Biblical.  I also noticed after the play, Butler was pointing to the sky on the sidelines.

2.  Most Gracious Interview:  It seems like most everyone is asking:  Why didn’t the Seahawks just give it to Marshawn Lynch for the go-ahead touchdown?  He almost scored right before and he is arguably the best running back in the NFL.

I really liked how Seahawks head coach Pete Carroll handled himself in his post-game interview with NBC with class and courtesy.  He called the game “fantastic” and a “true championship game, comes right down to those punches that you take.” He explained the offensive strategy with the Seahawk’s downs and time out and called Butler’s play “miraculous.”  He said that he told his guys “that’s my fault totally.”  Seems to be some debate on this, but in this moment Carroll, while obviously struggling with articulation, showed sportsmanship, and that’s something to share.

3. Most Historic Player:  Around here he is sometimes known as TB 12.  Of course, that’s Tom Brady, your starting quarterback for the New England squad wearing #12  Here are some other numbers for Brady’s Super Bowl time, but not all of them.

Sidenote:  Did you know the number of years Tom Brady’s father (also Tom Brady) was in the seminary, preparing for the Catholic priesthood before leaving?  7.

4. Best Commercial:  Wading into these highly subjective waters is dicey, as the whole Super Bowl subculture of religious commercial watching is a bit disconcerting to me.  However, there seemed to be a number of pro-family, pro-fatherhood in this year’s crop: oh, the wheat and the weeds.

Toyota’s “My Bold Dad” was my favorite  with the theme being choices a dad makes: “To get hurt rather than to hurt (as the commercial dad takes care of some pesky bees)… a choice that says ‘you’ll be there’ and “to show them right from wrong, by your words and by your actions.”