Rome and Kentucky are a perfect match in this classic dessert.

With Valentine’s Day fast approaching, the search is on for the perfect dinner menu. It can be especially hard to find a dessert that satisfies both men and women, but after a long search I’ve finally found one: Bourbon Panna Cotta.

Panna cotta, Italian for "cooked cream," is a common item on menus all over Italy. When I lived in Rome, I ate countless bowls of the heavenly stuff at a restaurant around the corner from the Vatican. Served chilled, panna cotta is creamy dessert light in texture, but rich in flavor; something akin to homemade ice cream, but not as cold.

It was a joyful day when I realized that not only could I make panna cotta at home, but that it was a snap. It’s basically cream jello. Armed with a good recipe, I made panna cotta, served with fruit or preserves, until I could do it in my sleep. And then it finally hit me: why haven’t I added bourbon to this?!

I’m not sure when my fascination with bourbon started. I still recall accidently drinking my father’s bourbon as a child and immediately spewing out the awful stuff that was definitely not apple juice. I still don’t drink it straight, but I use it whenever I can in cheesecakes, apple butter, pear clafouti, and more. Just as everything is better with butter, my own motto has become “everything is better with bourbon.”

Bourbon is part of the whiskey family. All bourbon is whiskey, but not all whiskey is bourbon. Made from fermented grains—such as rye, wheat, barley or corn—whiskey is then aged in wooden barrels. Archeological digs show the earliest “whiskey-style” fermentation dates back to second century BC Babylon and Mesapotamia. The art of fermentation was perfected in Irish and Scottish monasteries in the 11th and 12th centuries—climates not ideal for growing grapes. The so-called “water of life,” was used for everything from colic to small pox in the northern climes of Europe. With the Protestant Reformation under Henry VIII, monasteries were destroyed and monks were forced to reintegrate into society. These displaced monks brought their knowhow to the whiskey trade, further expanding the production of secular distilleries. 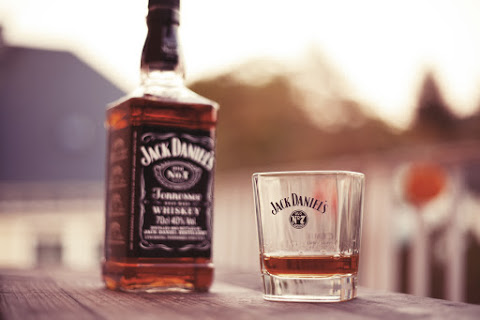 I toured the Jack Daniel’s distillery several years ago in Lynchburg, Tennessee. Seeing the slow process of fermenting “mash” was a quintessentially deep-South experience. (My tour was followed by lunch at the nearby Miss Mary Bobo’s, a family style eatery, and sitting across from me at the communal table was a Southern lawyer in seersucker named Royal, and his adult son, Doyle. Okra was served. To this day, I’m not sure if it was bald okra or boiled okra because of the thickness of the waitress’s accent)

No place makes as much bourbon as Kentucky, however. The blue grass state is the heart of bourbon production, home to Marker’s Mark, Jim Beam, Wild Turkey, and scads of smaller distilleries. What distinguishes bourbon from other whiskeys is that, according to bourbon law, it must contain at least 51% corn mash, and must be stored in freshly charred oak barrels. I find its smooth vanilla-y texture perfect for cooking.

There’s something about whiskey that men especially seem to love. Slowly sipping a finger or two while enjoying deep conversation (and perhaps a cigar) is almost a masculine rite of passage in some places. Even in Poland, Jack Daniels—brought over to Krakow by traveling Americans—has become so beloved by the Dominicans that it’s referred to in the monastery as “Br. Jack.”

Adding bourbon to dessert is a great way to win a man’s heart on Valentine’s Day, but it’s a treat that women will love, too. I first tested my bourbon panna cotta on dear friends visiting from out of town who had previously tried (and loved) my plain panna cotta recipe. Upon serving it, all conversation ceased; the only sound was the clinking of spoons against the serving glasses. Not one bite went to waste. I think they liked it. 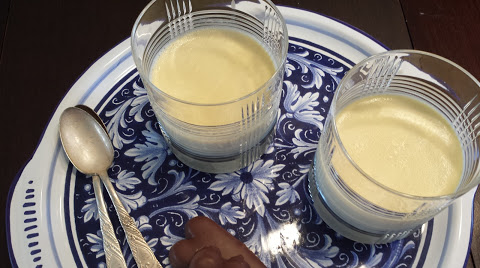 Bourbon Panna Cotta
The original recipe (minus the bourbon) can be found in What’s Cooking America?

1 envelope of unflavored gelatin (approx. 2 teaspoons)
1/2 cup milk or half and half
2 1/2 cups heavy cream*
1/2 cup sugar
2 teaspoons vanilla extract
1 to 1 1/2 T of bourbon (depending how strong you like your bourbon flavor)

Directions: In a small bowl, sprinkle the gelatin over 1/2 cup milk; let stand until the gelatin is softened while preparing cream. In a large saucepan, combine heavy cream and sugar. Add vanilla extract. Bring cream just to a simmer (do not let it boil), whisking occasionally until sugar has completely dissolved; remove from heat. Add the softened gelatin mixture and whisk to completely dissolve the gelatin. (The original recipe suggests straining the hot cream mixture. I’ve never done this and, in hindsight, never felt like I should have.) Refrigerate for at least 3 hours or overnight.

Panna cotta can be served in any dish or bowl, or unmolded after formed in a ramekin. I’ve also served it in red wine glasses, martini glasses, and vintage champagne glasses. It can also be easily packed up for picnics or served in mason or jam jars if you’re taking it to friends.

Makes 4 to 6 servings (depending on size of the serving cups). 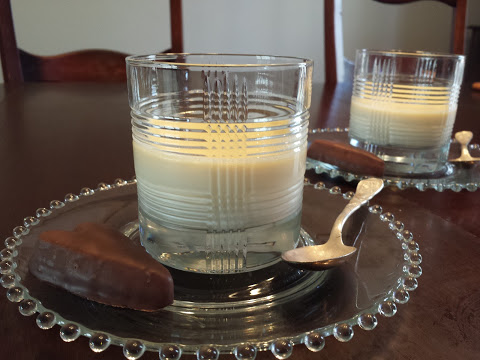