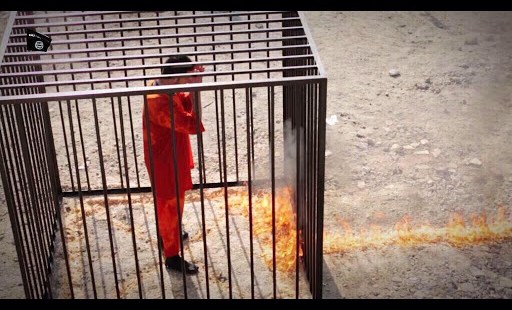 A key Christian leader in the Middle East has come out in support of fighting the Islamic State, in response to the apparent killing of a Jordanian air force pilot.

But the Latin Patriarch of Jerusalem, who oversees Christians in Israel, the Palestinian territories, Jordan and Cyprus, qualified the word “fight” to emphasize a more spiritual battle.

A video showing Islamic State militants burning a captive Jordanian pilot to death brought an outpouring of grief and rage across the Middle East on Wednesday, its brutality horrifying a region long accustomed to violence.

Political and religious leaders offered angry denunciations and called for blood, while at least one wept on air while talking about the killing of 26-year-old Lt. Muath Al-Kaseasbeh, whose F-16 crashed in Syria in December during a U.S.-led coalition raid on the extremist group.

“The Bishops, clergy and faithful of the Latin Patriarchate join in this anguish and share in the sorrow,” said Latin Patriarch Fouad Twal in a press release Wednesday. He said the incident “reminds us how the fight against any fundamentalist force is necessary and urgent. Too many men and women of all religions have already lost their lives in a most tragic and inhuman manner since the emergence of the so-called Islamic State, which is not a state and cannot claim any religion apart from it.

“All of us faithful Christians and Muslims are subject to their aggression,” the patriarch continued. “We are called to unite our forces with all people of good will to fight, mainly with the power of prayer and of wholesome education.

“The fear of God that we share in common should urge us to live as brothers and to support one another as we have done together in the Middle East for centuries,” the patriarch concluded.

At noon on Wednesday, the bells of all the Catholic churches scattered throughout the Hashemite Kingdom were to ring in sign of mourning for the gruesome killing of al-Kaseasbeh, according to Fides News Agency.

"Today at 6 pm, all Jordanian parishes will celebrate Masses and recite prayers for the soldier," said Archbishop Laroun Lahham, Patriarchal Vicar for Jordan of the Latin Patriarchate of Jerusalem. "Then an official delegation of the Catholic Church will travel to present their condolences to the family and the tribe to which Muath belonged."

The head of Sunni Islam’s most respected seat of learning, Egypt’s Al-Azhar, said the militants deserve the Quranic punishment of death, crucifixion or the chopping off of their arms for being enemies of God and the Prophet Muhammad.

"Islam prohibits the taking of an innocent life," Ahmed al-Tayeb, Al-Azhar’s grand sheik, said in a statement, adding that by burning the pilot to death, the militants violated Islam’s prohibition on the immolation or mutilation of bodies, even during wartime.

Capital punishment is used across much of the mostly Muslim Middle East for crimes like murder and drug smuggling. Death by hanging is the preferred method, but beheadings are routinely carried out in Saudi Arabia. In Iran and Pakistan, stoning to death as punishment for adultery exists in the penal code but is rarely used.

Burning to death as legal punishment, however, is unheard of in the contemporary Middle East, and a prominent Saudi cleric, Sheik Salman al-Oudah, wrote Wednesday that it is prohibited by Islam, citing what he said was a saying by the Prophet Muhammad that reserves for God alone the right to punish by fire in the after-life.

Youssef al-Qaradawi, a prominent Qatar-based cleric who is respected by the Muslim Brotherhood and other Islamists, issued a five-page statement on Wednesday in which he listed a number of Quranic verses and sayings attributed to Muhammad telling Muslims to not mistreat prisoners of war.