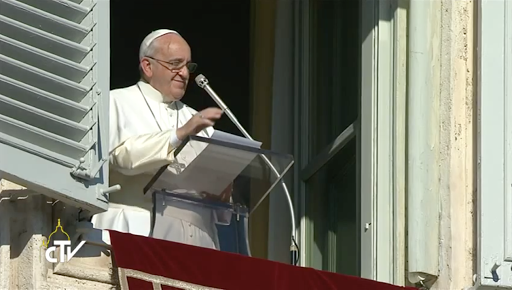 “His love transforms everything.”

In his Angelus address on the Second Sunday of Lent, Pope Francis called Christians to fix their gaze on the ultimate goal of Lenten conversion: an intimate participation in the glory of God, shining on the face of Jesus Christ.

Addressing the faithful and pilgrims gathered in St. Peter’s Square, the Pope reflected on the day’s Gospel account of the Transfiguration of Jesus on Mount Tabor (Mk 9:2-8), an event which took place at the climax of his public ministry.

“Jesus was on his way toward Jerusalem,” the Pope explained, “where the prophecy of ‘God’s Suffering Servant’ would be fulfilled and his redemptive sacrifice would be consummated.”

The Pope also said that Jesus chose to reveal his glory to Peter, James and John before his Passion “in order to confirm them in faith, and to encourage them to follow him on the path of trial, on the way of the Cross,” he explained.

The crowds, and even the Apostles, could neither understand nor accept the idea that the Messiah’s saving mission would be accomplished through suffering, he observed. “And so, on a high mountain, immersed in prayer, Jesus was transfigured before them: his face and his whole person radiate a brilliant light.”

Pope Francis continued: “The three disciples were exceedingly afraid as a cloud overshadowed them,” the Pope said to pilgrims gathered in St. Peter's Square, “and the Father’s voice resounded from above, as at the Baptism in the Jordan, saying: ‘This is my beloved Son; listen to him’ (Mk 9:7). Jesus is the Son become servant, sent into the world to fulfill, through the cross, the plan of salvation to save us all. His full adherence to the will of the Father makes his humanity transparent to the glory of God, who is Love.”

Indeed, he said: “Jesus reveals himself as the perfect image of the Father, the radiance of his glory. He is the fulfillment of Revelation. That is why Moses and Elijah — who represent the Law and the Prophets — appear alongside him transfigured, as if to signify that everything begins and ends in Jesus, in his Passion and glory.”

What message does the mystery of the Transfiguration hold for us? Pope Francis said the message is clear: “Listen to him. Listen to Jesus. He is the Savior; follow him.”

The 78-year old Pontiff explained that listening to Jesus means allowing one's mind and thoughts to be interiorly purified and tranformed by the Lord, through the power of grace: “Listening to Christ involves taking on the logic of his Paschal Mystery, by taking to the road with him in order to make one’s life a gift of love to others in docile obedience to the will of God, with an attitude of detachment from worldly things and interior freedom.”

“In other words,” he said, “a Christian must be prepared to ‘lose his life’ (cf. Mk 8:35), by giving it away so that all men might be saved.” And yet, he explained, it is only by giving our lives for the salvation of others that we will enjoy eternal happiness with them in heaven.

He therefore invited Christians to contemplate the Face of Jesus and so open themselves to the power of his purifying and transforming love in their lives.

“In reality,” he said, “love is capable of transforming everything. Love transforms everything.”

Pope Francis concluded his Angelus address by invoking the maternal support of the Blessed Virgin along the journey of Lent.