Pope Francis: Missionary to the USA 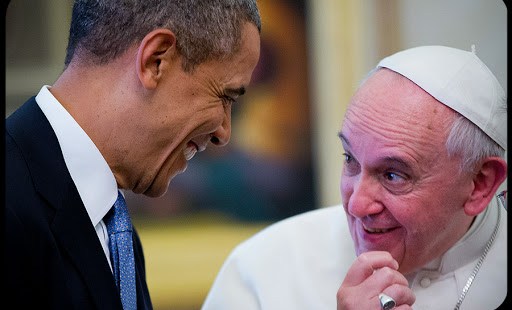 It is easy to get caught up in the culture wars of the United States and misunderstand Pope Francis’ and the Catholic Church’s primary mission. Last week as the United States Supreme Court deliberated on the difficult question of same-sex marriage Newsweek magazine’s Taylor Wofford noticed that Pope Francis voiced support for traditional marriage and seemed surprised that the Pope had not yet fallen in line with the progressive American agenda.

While the American media and blogosphere may be obsessed with ISIS terrorism, urban rage, race warfare, same-sex marriage and the upcoming presidential election, these issues are far down on the Pope’s list of concerns. It is important to remember that, although Pope Francis is a world leader, his main role is to be the successor of the apostle Peter. As such his task is to lead Christ’s church and go into all the world to preach the gospel. It is clear that Pope Francis is looking forward to his upcoming visit to the United States, and sees it as a missionary journey rather than merely a cultural, diplomatic or political exercise

To emphasize the missionary intention of his trip, Pope Francis recently visited the North American College in Rome to celebrate Mass. He took the opportunity to speak about the upcoming visit to the United States and the canonization of the Franciscan missionary Junipero Serra. He noted that long before the arrival of the Puritans in New England, the friar “ushered in a new springtime of evangelization in those immense territories, extending from Florida to California, which, in the previous two hundred years, had been reached by missionaries from Spain.”

Serra went out with a dynamism and joy reminiscent of the apostles. The pope enthused, "Such zeal, excites us, it challenges us…to go out to all geographical, social and existential peripheries.

Secondly, Blessed Junípero entrusted his missionary activity to Our Lady of Guadalupe—patroness of the Americas. Francis said, “She represents our shared roots in this land. Indeed, today’s mission to the continent is entrusted to her, the first, holy missionary disciple, a constant presence and companion, our source of comfort and hope. For she always hears and protects her American children.”

Finally, Serra’s witness was of total holiness. “May a powerful gust of holiness sweep through all the Americas during the coming Extraordinary Jubilee of Mercy…With this heartfelt prayer,” he concluded “I ask Our Lady of Guadalupe, Friar Junípero and all the American saints to lead me and guide me during my approaching apostolic journeys to South America and North America.”

With this clear statement, Pope Francis sets the stage for his first visit to North America. Inspired by Friar Junipero, the pope comes not as a superstar celebrity, an international diplomat or simply a spiritual leader, but as a successor of Peter the missionary.

Also inspired by the Divine Mercy devotion, Pope Francis’ main mission is to bring the message of mercy to a continent sorely in need of the light and grace of the gospel. Ironically, it is this message—which goes to the heart of the human condition—which also answers the questions which seem to obsess Americans at this time. To truly respond to the radiant mercy of Christ is to open oneself to the power that heals broken families, broken communities and broken hearts. When individuals are converted and touched by the Divine Mercy the healing begins to solve the problems of urban rage, racial hatred, distorted love, greed and lust for power.

Finally, the pope’s connection with Our Lady of Guadalupe, the apostles and Bl. Junipero Serra highlights the Catholic understanding of how God works in the world. The mission of the Catholic Church for the salvation of souls is not the task of Jorge Bergoglio alone. It is not even the task of the Pope alone. Instead it is the task of the whole church, living and departed. The missionary work of Pope Francis is part of the whole mission of the church. His visit to the United States recapitulates and brings into the present moment the humble obedience of the Blessed Virgin Mary, the apostolic zeal of St. Peter, the poverty and simplicity of Bl. Junipero, the mystical vision of St Juan Diego and the empowering action of the Holy Spirit.

In his visit to American, all of these factors and many more will combine together for an effective and transformative outreach. It is the work of all Catholics at this time, therefore, to watch and  support the Pope’s mission to America with prayers, dedication and enthusiasm.


Fr Dwight Longenecker blogs at Standing on My Head. Connect with his blog, follow him on Twitter and browse his books at dwightlongenecker.com