In Iraq, the Site of an ISIS Massacre Has Become a Pilgrimage 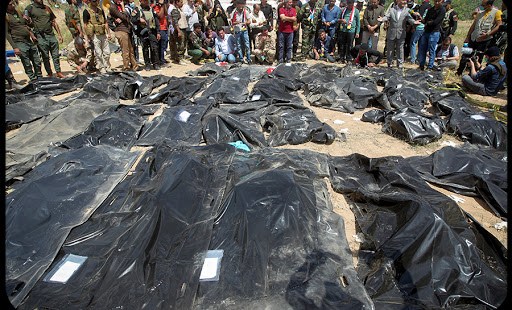 Iraq/Aleteia (Aleteia.org/ar) – Some might consider the site to be cursed, but it is being transformed into a shrine dedicated to Shiite martyrs. On the banks of the Tigris River, one of Saddam Hussein’s former palaces, which was the site of the horrific “Speicher Base” massacre (named after American pilot Michael Speicher, who was shot down during the 1991 Gulf War), is gradually being transformed into a pilgrimage site.

Here, the blood of the martyrs was shed

A year ago on the June 10, 2014 ISIS mercilessly slaughtered 1700 Shiite prisoners from the Iraqi Army, most of whom were young recruits. A few days later dozens of pictures and videos, which showed the massacre, were posted on the internet. According to Adrian Julam, a correspondent for the newspaper Le Figaro, “These pictures are, without a doubt, the first of its kind in history that attest to this collective crime. These pictures taken by ISIS were posted as if they had just won a glorious championship.”

In one of the videos, Salafist terrorists are shown escorting prisoners, one after the other near the Tigris River which passes through Tikrit. The terrorists shoot the prisoners in the head before throwing them in the water. There are no grave markers or epitaphs. “Here, the blood of martyrs was spilt. This place must be transformed into a museum for all Iraqis, and a symbol of pride,” said Sheikh Dargham al-Jabari, a spokesman for Ayatollah al-Sistani, the highest Shiite religious authority in Iraq who came to offer prayers at the memorial site.

Dozens of Iraqis coming to meditate at the site

On the first of April 2015, at the end of the Tikrit battle, the Iraqi forces discovered ten graves in the vicinity of the palace. Then, Mu’ayn al-Kazami, a “Badr” official, the largest and most influential Shiite militia in Iraq promised to preserve the site. He spoke to L’Orient Le Jour, a Lebanese French-speaking newspaper and said, “We will restore this area in order to turn it into a symbol of the crimes committed by ISIS and its allies. It shall forever be a stain of disgrace upon their faces.”

Since the recent liberation of Tikrit dozens of Iraqis have come to this place to meditate. All of them are gathering near the shores of the Tigris where hundreds of innocent young men were driven to their deaths. The relatives of the victims are flowing in from all parts of Iraq, according to  ‘Abd-al-Hassan, a guard at the site. He said, “The spirit of this site will remain with me until I die. One day I hope that my wife and children will come here because it is holy.” Clerics, students and artists are making pilgrimages to this place that has somehow been transformed into both a sacred memorial and a sanctuary of resistance to the savagery of ISIS.