Cardinal Erdö: The Central Question for the Synod Is “What is Christianity?” 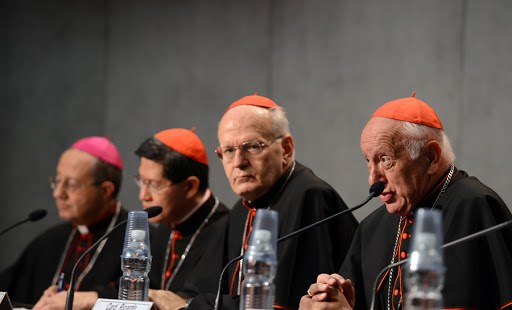 VATICAN CITY — The Church’s teaching on marriage has always been “difficult and provocative,” Cardinal Peter Erdö of Hungary said recently. And the Church “needs to keep this serious fact in mind” as she seeks to “address the situations of the world today.”

For the Hungarian prelate, in fact, the central question in the lead-up to the October Synod on the Family is: “What is Christianity?”

Cardinal Erdö, the General Relator of the Synod of Bishops, was speaking June 23rd, at a press conference held at the Vatican to present the Instrumentum laboris [working document] for the upcoming Synod.

In the time reserved for questions, several reporters asked about paragraphs 122 and 123 of the working document, which deal with the controversial proposal that the Church admit divorced and civilly “remarried” Catholics to Holy Communion. Paragraph 122 was one of three passages rejected by the Synod Fathers last October in the Vatican, having failed to gain the required two-thirds majority.

On hand at the briefing were two other key figures in the October Synod: Cardinal Lorenzo Baldisseri, Secretary General of the Synod of Bishops; and Archbishop Bruno Forte, Special Secretary of the Synod.

Cardinal Erdö’s comments were poignant and well received, yet gained little attention in the media. We therefore publish his remarks here below.

Question by Gianni Giannelli, of Vatican Insider: I believe my question ties in to the last one. What impedes Eucharistic Communion in the case of a failed marriage is called “adultery.” The question is this: Is it possible to consider — and I believe it’s right to consider “adultery” to be a married man who during the day is with his wife and at night is with his lover — but is it possible to consider it “adultery”  — which impedes access to the Eucharistic — in a situation 15 years after the failure of the first marriage, after 10 years of living with another person faithfully, and with children. Can we say that it’s “adultery” in the same way? The element of time seems to me a determining factor … I have the impression from this Instrumentum Laboris that everything and nothing is promised. Let’s hope that letting one’s ‘yes’ mean ‘yes’ and ‘no’ mean ‘no’ also goes for the Synod.

Cardinal Erdö​: The issue is a deep one, and we cannot provide an exhaustive answer with a brief response. There are serious matters here, because the central question of the synod is ultimately: “What is Christianity?” If we are a natural religion, then we should reflect philosophically on the world, on human experience, and seek a solution which perhaps changes with each generation. Or are we the disciples of Jesus Christ, who was a concrete historic person with a concrete teaching, and with whom we connect history, tradition, and whose teaching is identifiable enough.

Therefore, with great respect we need to examine the Bible. With passion, we need to seek the personal Face of Jesus Christ and his voice, and naturally we also do so through the tradition of the Church.

And we see precisely in this disciplinary tradition that the teaching of Jesus on adultery was a very demanding teaching, even scandalous in his own day. Even his own disciples said: “If this is the way it is, it’s not worth it to marry.” Therefore, it wasn’t the widespread opinion in Judaism in his time. Even the Rabbis in Galilee in the times of Jesus, whose teaching is now better researched and more widely known, had other opinions, which were different from this. And so the teaching of Jesus was very strong.

Regarding the tradition of the Church, there were unexpected issues raised at Councils, and the Church repeated the words of the Gospel. I can give you the example of the first text in the history of Christianity in Hungary. It was the Council of Szabolcs, under St. Ladislas at the time of Gregory VII, which said: If a man finds his wife with another man, he should send her away. But if the wife repents, he can take her back. If he doesn’t take her back, the wife can’t remarry, but neither can the husband. So it was a very strong discipline in comparison with customs of the Hungarians who were still close to paganism. It was very firm. And yet the Church wanted to defend this position.

Therefore, the Church has always known that her message on marriage contains something difficult and provocative. We need to keep the seriousness of this fact in mind, and yet still seek to address the situations of the world today, because our mission is directed to the world today.