6 Things You Need to Know about the Motu Proprio 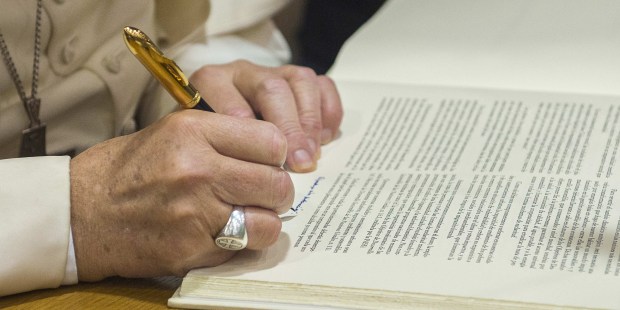 On September 8, 2015, Pope Francis issued an Apostolic letter Motu propio, titled Mitis Iudex Dominus Iesus (“The Lord Jesus, Clement Judge”), initiating a reform in the Church’s procedures for determining the nullity of marriage cases. Here is what you need to know:

What is a Motu proprio? “Motu proprio” is a descriptor attached to certain Church documents indicating a project which was undertaken at the Pope’s own personal initiative. In the Motu proprio Mitis Iudex Dominus Iesus, we see Pope Francis’ personal concern for Catholics in irregular marriage situations who desire to be reconciled with the Church.

Did Pope Francis change doctrine? No. Although some aspects of doctrine might be further clarified over time, the Church’s teachings have been handed down to us from Christ through the Apostles and their successors, and as such are unchangeable. In Mitis Iudex Dominus Iesus, Francis was careful to articulate this. Specifically, he confirmed the Church’s teaching that a lawful, consummated, sacramental marriage is a bond that cannot be broken by any force other than death. What Pope Francis did change, however, were some of the Church’s legal procedures for determining when to issue a declaration of nullity.

What is a declaration of nullity? A declaration of nullity is often popularly called an “annulment.” But this is not a very accurate term, since the Church is not actively making a marriage null, but is merely recognizing the fact that the marriage was actually already null from its very beginning. There are some situations where a couple might have appeared to have entered into a marriage, when in reality some essential element to a real—that is, a “valid”—marriage was missing.

If a married couple has reason to believe that their marriage might be invalid, they have the right to approach the Church for a clear answer on the truth of their situation. The Church in turn makes itself available to provide such answer through canon law (the Church internal legal system) and local diocesan tribunals (the Church’s courts).

The details of the canonical process for determining validity of a marriage can be complex and technical, but essentially it involves a tribunal: determining a possible reason why the marriage might have been invalid; collecting objective evidence—such as witness testimonies, documents, or professional opinions from experts such as medical doctors or psychologists—which would either support or rule out that proposed reason; and then coming to an impartial judgement on whether or not the marriage was valid. If the marriage was determined to be invalid, the tribunal issues a “declaration of nullity,” and the parties are considered by the Church as free to marry.

Why did Francis make changes to this process? The legal process for determining the validity of marriage has developed over the centuries in order to meet the twofold goal of respecting the sanctity of marriage, as well as protecting the rights and dignity of everyone involved. However, many of the safeguards in place have had the side effect of making the process longer and more complicated than was strictly necessary. Many bishops believed that some of these legal safeguards actually did more harm than good in terms of protecting the rights of the faithful, because they made the whole process more burdensome and tribunals more difficult for the faithful to approach in the first place. This latest document is Pope Francis’ attempt to tailor the process to the specific pastoral needs and circumstances of today’s Catholics.

What specific changes did Pope Francis make? Some of the more notable changes include:

Did Pope Francis make it easier to obtain a declaration of nullity? Yes and no. “Yes,” in so far as some common delays and complications will be avoided in many cases, which will (hopefully!) make the process more accessible to more people.

But in another sense, no, it will not be “easier.” The process for determining the validity of a marriage is still focused on discerning the truth according to the Church’s teachings on the nature of marriage. Even if the truth is proved through slightly different means, it will still need to be proven in conscience and with moral certainty.

Jenna M. Cooper is a consecrated virgin of the Archdiocese of New York. She completed a licentiate in canon law at the Pontifical University of the Holy Cross in 2014.