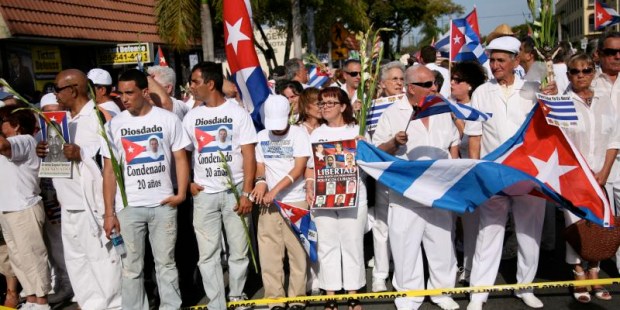 A week ahead of Pope Francis’ first visit to Cuba, Havana announced that it would be releasing 3,522 prisoners.

Elizardo Sánchez, spokesman of the Cuban Commission for Human Rights and National Reconciliation (CCDHRN, its abbreviation in Spanish), stated that not one of those his organization has listed as “political prisoners” is included among the 3,522 who are being pardoned. CCDHRN is the only organization on the island that documents cases of detention of dissidents and that maintains a list of political prisoners. According to its information, there are currently 60 people being held for “political reasons or due to politically conditioned proceedings.”

Sánchez explained on Sept. 14 that the official notification in which the island’s government announced the pardons specified that those who have been condemned for crimes against the security of the state, “charges imputed to the majority of those considered political prisoners,” would not benefit from the act of clemency. The names of those pardoned were published in the Official Gazette on Sept. 11.

Former political prisoner José Daniel Ferrer, leader of the dissident Patriotic Union of Cuba (UNPACU, for its acronym in Spanish) also confirmed for the Efe news agency that none of the 21 members of his organization currently in prison “for political reasons” are among the pardoned. Ferrer explained that the two members of UNPACO in prison for common crimes haven’t been pardoned either.

This massive pardon, just days before the Pope’s arrival to the island, is one of the largest releases from prison granted by Castro’s revolutionary government. Similar measures were adopted in the past on the occasion of the previous by John Paul II and Benedict XVI. The pardon will benefit prisoners more than 60 years old, those under 20 years old without a previous criminal record, those who are chronically ill, women, and prisoners who were going to receive parole in 2016, as well as foreigners, as long as their country of origin guarantees their repatriation.

By way of contrast, Elizardo Sánchez reported that dozens of activists of the Ladies in White group and other dissidents were detained on the island after a protest last Sunday. Among those detained were also dissidents José Daniel Ferrer and Ángel Moya. According to the leader of Women in White, Berta Soler, a total of 50 people were temporarily detained after the march the activists normally hold on Sundays, demanding freedom for political prisoners. Most of those arrested were released hours later.

Soler indicated that she was freed at the end of the afternoon. Detentions of this kind have been repeated over the past several weeks, the group’s leader added.

Translated from the Spanish by Matthew Green