Philly or Bust: One Family’s Hopes for Their Vacation at WMOF 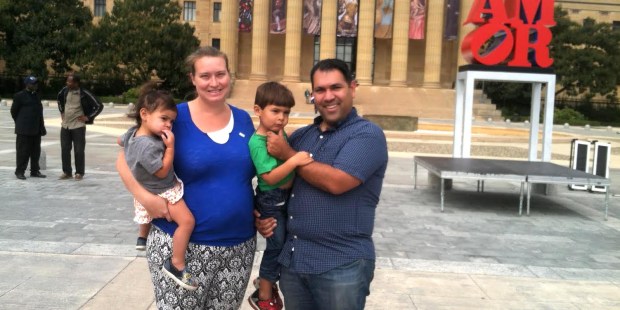 What’s your family doing at the World Meeting of Families? Share it with Aleteia using #ourwmof

For much of their eight hour drive from Columbus, OH to Philadelphia, PA, the Bennett family was guided by lit up signs that read, “Pope Visit to Philadelphia Sept 26-27.”

“They were all along the road from Ohio,” says Megan Bennett, 31, who along with her husband, Anthony, 33, and their young children — Samuel (3.5), Caroline (2), and baby Beatrice due in December — are now in the City of Brotherly Love to take in the World Meeting of Families this week and catch a glimpse of “Papa Francesco.”

Anthony, who’s from Panama, has a particular fondness for this Pope, who embodies “that distinctly Latin American spirituality.” He loves being able to read Francis’ homilies and encyclicals in Spanish to experience him more authentically — and quickly.

Morgan, who with her husband had a great love for Pope Benedict XVI, has grown to love Francis for what he brings to the papacy.

“His emphasis on always loving the person first, serving people more than ideas, being charitable in every small way we can, has really impacted my decision-making and attitudes,” she says. “We love that he encourages us to constantly question how we relate to others and to the world around us, economically, socially, environmentally, and to re-evaluate it all in the light of Christ.”

As excited as the Bennetts are about the Pope, long before they knew he would be in Philadelphia, they had planned to attend the World Meeting of Families. With their toddlers in a nearby hotel with a babysitter some of the time, the couple will split up for a number of talks and breakout sessions.

“We’re really excited about seeing newly installed Bishop [Robert] Barron—we have a friend who works for him—and Cardinal [Sean] O’Malley, who’s doing a keynote with Pastor Rick Warren, ” says Morgan. “We feel really torn between what to choose — there’s so much! Do we go to talks about marriage and family or, say, the Edith Stein mini-retreat about the dignity of women?”

There are many other events related to the papal visit that the Bennetts hope to take in over the next few days, including exhibits at the Meeting on the Bible, the Lego Vatican, a film festival, and venerating St. Maria Goretti’s relics.

“We have no idea how much of that is feasible, ” says Morgan. “We’re also hoping to go to adoration and confession while we’re here, which is hard to do with the kids at home!”

The one non-negotiable while they’re in Philadelphia isn’t even part of the conference: they’re hitting the Philadelphia Museum of Art.

“We’re a little worried that the kids will be bored, but Anthony is an art lover and artist himself and there’s such an amazing collection here… It’s also the pinnacle of the museums on Ben Franklin Parkway and will be a good trial run for how to get there for the Festival of Families and the papal Mass.”

When asked what they’re most excited about this week — which is their only family vacation this year — the Bennetts say it’s being with friends they haven’t seen for a long time, and having some “grown-up time to think about grown-up things.”

“This is especially true for Morgan, a stay at home mom,” says Anthony. “While she sees it as a huge blessing, her main conversationalists like to talk about the Lego movie and squirrels, and want her to pretend to be a monster and chase them. So the opportunity to take in so much and then take it home with us to unpack is a huge gift.”

Oh, and then there’s the comedian, Jim Gaffigan.

“We’re beyond excited to see him do stand up, and hope he does some stuff we haven’t seen before! ” says Morgan.

What is your family doing at the World Meeting of Families in Philly this week? Share it with us using the hashtag #ourwmof